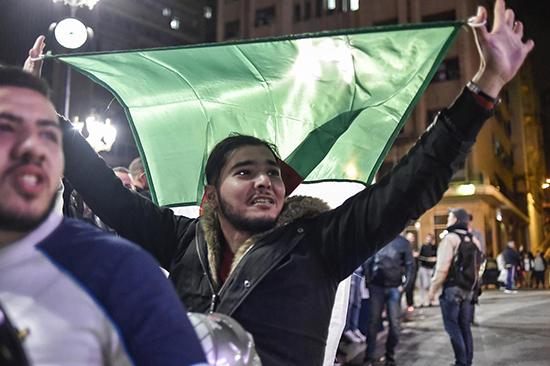 Algeria’s Abdelaziz Bouteflika has announced that he will not be running for a fifth term as president, amid weeks of mass protests calling on the ailing leader to forego his bid for reelection.

In a statement published on Monday by state-run Algeria Press Service (APS), Bouteflika said “there will not be a fifth mandate”.

He also said he would postpone the country’s presidential elections, which were originally scheduled for 18 April.

“The postponement of the presidential elections … aims to appease concerns that were raised,” Bouteflika’s statement read.

Algerians of all ages have protested across the country for the past several weeks in anger over the 82-year-old leader’s plan to seek reelection.

Bouteflika’s attempt to secure a fifth mandate, after two decades in power, pushed tens of thousands into the streets to call for his resignation.

After the announcement on Monday, hundreds of people, young and old, celebrated in the capital Algiers, Reuters news agency reported.

“Our protests have borne fruit! We defeated the supporters of the fifth term!” Mohamed Kaci, a 50-year-old taxi driver, told the news agency.

Students, lawyers, journalists, trade unions and even members of Bouteflika’s own National Liberation Front (FLN) Party had also added their voices to the protesters’ call for the president not to seek reelection.

Over 1,000 Algerian judges on Sunday said they would refuse to oversee the country’s elections if Bouteflika ran for a fifth term.

The move represented one of the biggest blows to the ailing leader, with the judges shredding their long-standing neutrality and effectively backing the protest movement.

Bouteflika, who suffered a stroke in 2013 and has rarely been seen in public since then, arrived back in Algiers on Sunday from Switzerland after undergoing what authorities said were “routine medical checks”.

Protesters flooded the streets of the capital chanting “Bouteflika, there will be no fifth term”.

In his statement on Monday, Bouteflika also said he intends to make “important changes in government”.

“Those changes will be an adequate response to the expectations you have come to me with,” he said.

Meanwhile, the APS reported that the country’s interior minister, Noureddine Bedoui, will take up the role of prime minister. Ramtane Lamamra, a diplomatic advisor to Bouteflika, was named deputy prime minister, Reuters said.

No date set for elections

Bouteflika said the decision to push back the presidential poll also aimed to promote “serenity, quietude and public security, with the objective of undertaking actions of historic importance that will allow us to prepare as quickly as possible for a new era in Algeria”.

His statement did not say when the presidential elections would be held, however.

Instead, he said he intends to convene an “inclusive and independent” national conference to discuss political reforms and a new constitution for the country.

‘The first part is won [but] we can’t stop the demonstrations. The current presidency cannot continue until the end of 2019’

The conference, which Bouteflika said will be headed by an independent and experienced person, “will work to complete its mandate before the end of 2019”.

That means that Bouteflika will effectively stay on as president at least until the end of the year.

That prompted caution from some, such as Soufiane Djilali, coordinator of Mouwatana, a grassroots, opposition movement that has called for Algerians to take part in the protests.

“The first part is won [but] we can’t stop the demonstrations,” Djilali told MEE on Monday. “The current presidency cannot continue until the end of 2019.”

In his statement, Bouteflika said the new constitution will be voted on in a national referendum.

“The national, independent conference will decide on its own accord the date of the presidential election,” Bouteflika said, reaffirming that he “will in any case not be a candidate”.