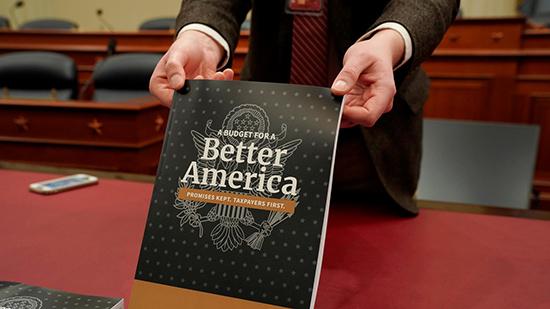 Russia  Today
President Donald Trump has announced his 2020 budget request. The $4.7 trillion funding plan cuts foreign aid and DC spending, and gives a boost to the military and border security, as well as to countering Russia’s “influence.”

Announced on Monday, the 2020 budget promises to drive down the US’ staggering $22 trillion debt by cutting “wasteful Washington spending,” while demanding more resources for defense and national security.

The document outlines $2.7 trillion in spending cuts aimed at slashing nondefense spending by five percent. The State Department will see its spending cut by 23 percent, the Environmental Protection Agency will suffer a 31 percent chop, and food stamps will be cut by $17 billion and other welfare programs by $22 billion.

Cutting welfare programs is par for the course for a Republican president, and Trump has extended the ethos to foreign aid too. $13 billion will be sliced off the roughly $50 billion the US spends on foreign aid every year.

The budget hikes the US’ already astronomical $716 billion yearly defense spend to $750 billion. With Pentagon officials and private researchers talking up the supposed threat of China and Russia, the budget promises to fund “strategic competition” with the two burgeoning superpowers, as well as efforts to deter North Korea and Iran and counter international terrorism.

Not even the budget is above a dose of ‘Russiagate’ hysteria. Over $500 million will be provided to Europe, Eurasia, and Central Asia to counter “Russian malign influence,” and convince nations there to switch from using Russian-made weaponry.

Back in the US, Trump has asked for $5 billion to fund the construction of his long-promised border wall, and $3.8 billion to repay the funds redirected following his national emergency declaration last month. The president has asked for $506 million to hire more Immigration and Customs Enforcement (ICE) and Customs and Border Protection (CBP) agents.

Trump’s budget will likely face stiff opposition from Democrats, particularly for its focus on border security. House Speaker Nancy Pelosi and Senate Minority Leader Chuck Schumer vowed to push back against any attempt to force the border wall through Congress a second time.

.@realDonaldTrump hurt millions of Americans and caused widespread chaos when he recklessly shut down the government to try to get his expensive and ineffective wall, which he promised would be paid for by Mexico. pic.twitter.com/YtljS96gcD

“President Trump hurt millions of Americans and caused widespread chaos when he recklessly shut down the government to try to get his expensive and ineffective wall,” they said in a joint statement on Sunday. “Congress refused to fund his wall and he was forced to admit defeat and reopen the government. The same thing will repeat itself if he tries this again. We hope he learned his lesson.”