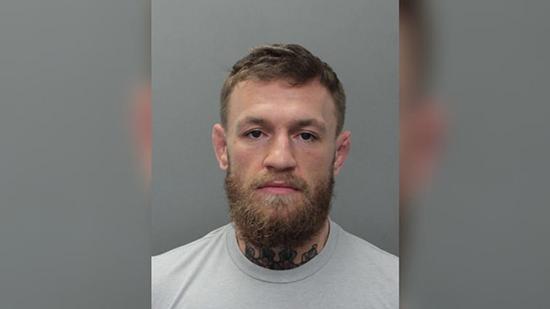 Russia Today
MMA fighter Conor McGregor was arrested and charged with ‘strong-arm robbery’ in Miami Beach, Florida, after police said he slapped a cell phone out of a fan’s hand, stomped on it and left with it.

The fighter was leaving the Fontainebleau Miami Beach hotel after 5 a.m. on Monday when someone tried to take a photo of him with a cell phone, according to police. McGregor reacted by destroying the phone, then picking it up and walking away with it.

The 30-year-old MMA fighter was arrested Monday evening after a day-long investigation by Miami Beach police, who said the incident was captured on the resort’s surveillance cameras. McGregor was booked into a Miami-Dade county jail.

McGregor was released the same evening on a $12,500 bail bond. He has been charged with one count of strong-arm robbery and one count of criminal mischief, for grabbing a cell phone worth some $1,000, records show.

While McGregor refused to speak to the media upon his release, the fighter’s lawyer, Samuel J. Rabin Jr, described the face-off as a “minor altercation,” saying that the Irishman “appreciates the response of law enforcement and pledges his full cooperation.”

The Irishman was reportedly vacationing in South Florida and preparing to return to fighting in the UFC, after his six-month suspension over the brawl that followed his UFC 229 bout with Khabib Nurmagomedov in Las Vegas in October.

Last week, McGregor posted photos from the Versace Mansion on South Beach, where he celebrated his mother’s 60th birthday.

The arrest comes almost a year after McGregor was arrested in New York for attacking a bus carrying several UFC fighters – apparently targeting Nurmagomedov. He pleaded guilty to a disorderly conduct charge and was sentenced to three days of anger management courses – which apparently didn‘t work – and five days of community service.