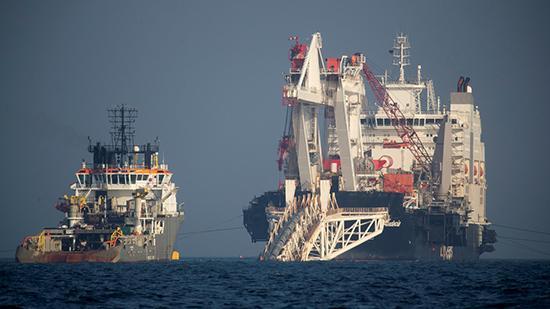 Russia  Today
The US may slap sanctions on the Nord Stream 2 pipeline, which will supply Russian gas to Germany via the Baltic Sea, US energy secretary Rick Perry confirmed. The project has driven a wedge between Washington and Berlin.

Asked by reporters on Monday if sanctions were possible, Perry said this was “still under consideration” and that Nord Stream 2 is a “political pipeline” that Washington does not support.

The Trump administration has been pushing Germany to abandon the project in favor of buying more expensive US liquefied natural gas (LNG) and says it is worried about Europe becoming too “dependent” on Russian energy.

Sources had earlier told the Wall Street Journal that such sanctions on the Russian-European joint project would likely be implemented via amendments to the Countering America’s Adversaries Through Sanctions Act (CAATSA) and would affect investors in the project and companies employed to lay the pipeline.

An anonymous official cited by the WSJ said that US President Donald Trump sees the project as “incompatible with the military shield America maintains over Europe” and has repeatedly pressured German Chancellor Angela Merkel to abandon its energy contracts with Moscow, telling her “Angela, you got to stop buying gas from Putin,” according to the source.

But German officials have shown no indication that they are willing to give up on the project, with one telling the newspaper that US intransigence on the issue will hurt its relations not just with Germany but the rest of Europe. Berlin officials told the WSJ that sanctions would be perceived as aggression on a fellow NATO member and would widen the US-German rift.

“We will do anything it takes to complete this pipeline,” one said.

It’s not the first time that the US has threatened to hit Nord Stream 2 with sanctions. In January, German government sources told Handelsblatt newspaper that Swiss-based Allseas Group and Italian Saipem may face sanctions for their involvement in the project. Allseas will reportedly lay over 90 percent of the controversial pipeline.

During an Oval Office meeting in February, Trump also reportedly told Austrian Chancellor Sebastian Kurz – who supports the pipeline – that he would impose sanctions on the multi-billion dollar project if Germany proceeded.

US Vice President Mike Pence has also publicly lashed out over the energy deal and chastised Germany during the Munich Security Conference last month, saying the West can’t be strengthened “by becoming dependent” on the East. Merkel dismissed Pence’s comments, however, saying that Germany must “maintain sovereignty” over its energy policy.

“Geostrategically, Europe can’t have an interest in cutting off all relations with Russia,” Merkel said.

Last December, US lawmakers passed a resolution echoing Trump’s rhetoric against the pipeline, calling it a “drastic step backward for European energy security and United States interests” but, so far, no sanctions have actually been imposed.