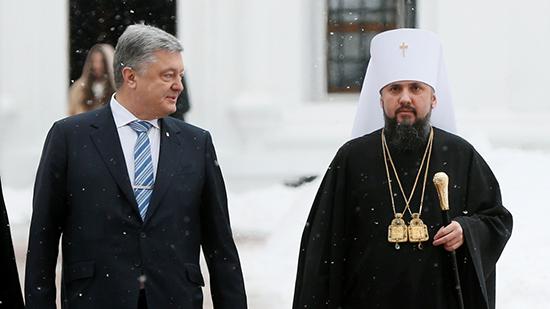 The UN human rights watchdog has acknowledged the violation of religious freedom in Ukraine, namely “intimidation” against the canonical Ukrainian Orthodox Church by the country’s authorities and far-right groups.

The Office of the UN High Commissioner for Human Rights (OHCHR) has released a new report on the human rights situation in Ukraine. Among various violations, primarily related to the ongoing conflict in the east of the country, the report acknowledged the worrisome situation regarding freedom of religion and belief.

The ongoing religious turmoil in Ukraine was triggered by the efforts of the Constantinople Patriarchate, Kiev authorities and President Petro Poroshenko personally, who spearheaded the creation of a new, homegrown “independent” church. The so-called Orthodox Church in Ukraine was created at the “unification council” late in 2018, which was attended predominantly by assorted schismatic priests.

Amid the emergence of new religious organizations, the UN watchdog has “documented incidents that could be perceived as acts of intimidation” against the canonical Ukrainian Orthodox Church of the Moscow Patriarchate.

The violations, listed by the OHCHR include a number of criminal investigations, launched by the Ukrainian Security Service (SBU) over “incitement to religious enmity and hatred.” The investigations have targeted, exclusively, the canonical Church.

“The SBU conducted searches in the premises of the Ukrainian Orthodox Church of the Moscow Patriarchate and places of residence of clergymen, questioning some of them,” the report reads.

Apart from that, the UN watchdog said that the new law, obliging religious organizations with centers located at the “aggressor state” – Russia – to rename, “may be discriminatory.” The fact that Kiev authorities “warranted restrictions on access of the clergymen of such organizations to the premises of the Ukrainian Armed Forces” is also concerning to the OHCHR.

The watchdog has also documented improper transfer of religious assets when certain “religious communities decided to join” the new church. Basically, such “transfer” effectively amounts to seizure, yet the UN avoided the usage of any strong language.

“OHCHR received reports that in a few cases the transfers were not voluntary and were initiated by state or local authorities or even representatives of extreme right-wing groups, who were not members of those religious communities,” the report states.