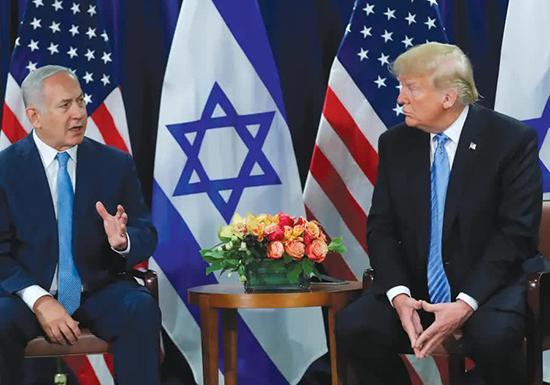 Co-founders of the Israeli NGO Blue White Future explain that a balanced peace plan could offer hope to both Israelis and Palestinians.

Israelis and Palestinians have been waiting for the Trump administration’s “deal of the century” peace plan since May 2018.

Now, President Donald Trump is saying he will unveil this plan only after the April 9 Israeli elections. However, there is a strong argument to be made that the peace plan should be shared

“The time politically is never ripe in the Middle East,” says Gilead Sher, a former chief of staff to prime minister Ehud Barak and a senior Israeli peace negotiator. “If the plan is ready, let’s hear about it, without any calculations as to whether or not it is supportive of this or that party’s agenda.”

In a conversation with The Jerusalem Report, Sher, Ami Ayalon and Orni Petruschka – co-founders of the Israeli NGO, Blue White Future – explain that a balanced peace plan could offer hope to both Israelis and Palestinians. It could also play a key role in restoring America’s dwindling influence in the Middle East and the rest of the international arena and enable a coalition of regional moderates to constrain Iran.

Further, by revealing it now, it would bring the subject of the Palestinians back into the discourse. Many candidates seem to be skirting this issue, which is so crucial to Israel’s future.

“We are living in a virtual reality, in which there are no Palestinians during the election campaign,” says Ayalon, former director of the Israeli internal security agency Shin Bet. “Our relationship with the Palestinians will determine whether in 40 years Israel will be a Jewish democracy.”

He says that current elections campaigns are centered on corruption, while they should be focused on the Palestinian issue.
But how can Trump’s Mideast team succeed where predecessors failed? According to this team, by redesigning the process and framework.

Sher, Ayalon and Petruschka say it is time to discard the bilateral negotiation-exclusive paradigm and abandon the principle that “nothing is agreed until everything is agreed.” Rather, they say, encouraging and even incentivizing both sides to take constructive, independent steps toward disengaging from one another, thereby creating a reality of two states, and advancing gradually toward delineating a border between two distinct national entities, could bring about peace in the Middle East.

“We offer a replacement formula: Whatever is agreed upon or mutually coordinated is implemented,” says Sher.

Ayalon says that the Israelis should call on every Palestinian leader who is willing to negotiate, but the country should not wait for this utopian reality of a Fatah-Hamas reconciliation and a partner for peace across the table.

“Israel could simply declare: From tomorrow morning, there will be no building east of the security fence,” says Ayalon as an example. “When we have negotiations, we will agree on many issues and the borders will be one of them, but until then, we just stop building.”

He says the government could pass a law offering compensation to any settler who wishes to relocate to an area that will be guaranteed part of Israel in any future two-state solution.

Relatedly, Israel could take unilateral action to create a secure, supervised port for the Gazan economy, which would create an outlet to the rest of the world and a genuine reason for a more promising future for the next generation of Gazans. But to make sure that this port won’t serve terror, Israel could put Palestinian Authority leaders and security forces in place to oversee it – and protect it from Hamas.

“It is in our best interest, that the PA would control the Gaza port,” explains Ayalon. “Then, when the Gazans see and feel improvements in their lives, they will see the Palestinian Authority as being a big part of that.”

Of course, says Ayalon, no matter the moves Israel makes, to ensure the country’s safety, the IDF would not pull out of any region.

“The IDF will stay to make sure we do not repeat the mistake of the Gaza [disengagement], creating a vacuum that would enable Hamas or some other terrorist organization to control the West Bank,” he says.

Sher, Ayalon and Petruschka do have a vision for what the Trump deal of the century must include for it to be a viable plan: For it not to be dead on arrival, the plan’s clearly stated goal must be, “two states for two peoples,” they say.

And to meet both sides’ needs, it must encompass the following elements: 1) a viable and democratic Palestinian state living peacefully side by side with Israel, based on the 1967 borders with equitable territorial swaps; 2) security cooperation between Israel and a demilitarized Palestine with mutual guarantees; 3) compensation and practical rehabilitation arrangements for Palestinian refugees including termination of the refugee status; 4) Jerusalem serving as Israel’s capital and the Arab neighborhoods in East Jerusalem as Palestine’s, with a special regime over the Old City; 5) free access to and worship in the holy places; and 6) finality of mutual claims.

“The Palestinians would live in a distinct political entity that is the national state of the Palestinian people in more or less 22% of British Mandatory Palestine, with a boundary between their state and the State of Israel, the national homeland of the Jewish people,” he says. “It will be a demilitarized Palestinian state with certain limitations regarding a myriad of areas, but this will be an expression of self-determination for them in a state of their own.”

Fatah and Hamas will have to reconcile to make it possible, they say.

“The Palestinian state needs to be one state, with one government, one security force and one law and that requires reconciliation,” says Sher.

Sher, Ayalon and Petruschka argue that to effectively confront Iran, a regional coalition of relatively moderate Sunni regimes, headed by Egypt, Jordan and Saudi Arabia, with tacit participation of Israel, must be created. However, Arab leaders cannot take part in such an effort today because their people will not tolerate cooperation with Israel unless it enters a credible process aimed at resolving the Israeli-Palestinian conflict.

Thus, the sooner the US launches its peace plan, the sooner Iran’s ambitions are curtailed.

Ayalon says the Americans should be encouraged to work with its Quartet partners, as well as regional partners, which would include considering the framework of the 2002 Arab Peace Initiative.

The US and Israel have virtually ignored this Initiative, even though it offers Washington a path toward a two-state solution and Israel a vehicle for normalization with the Arab-Muslim world.

The US and Israel should publicly accept the Initiative, with reservations, say Sher, Ayalon and Petruschka.

“The Palestinians have lost hope in diplomacy,” says Ayalon. “The only way to go back to the nineties, to the time in which 75% to 80% of Palestinians believed in diplomacy is to present a political horizon that is achievable by diplomacy.”

There is an option to create influence without troops, these thought-leaders say, but the language of diplomacy seems to be one that Israelis, Palestinians and Americans forgot.

“Imagine that tomorrow morning, our prime minister – no matter what his name – tells the world, ‘My vision for Israel is to see a Jewish, democratic and secure state,’” says Ayalon. “This should be the language of the current election.”

In the meantime, extremists on both sides that have been shaping history in the region for the last three decades will continue to rule.

“Why wait?” they say. Israelis and Palestinians need the peace plan now.