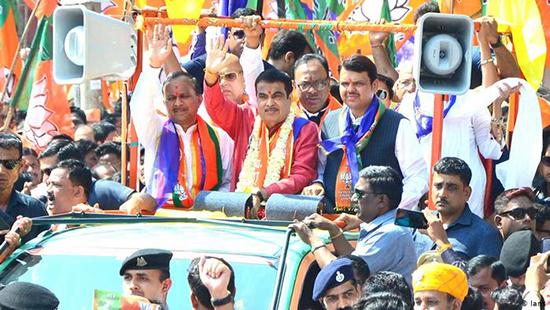 Ahead of India’s general election, set to kick off on April 11, the Indian Election Commission reported numerous seizures of cash, illegal liquor and drugs from political parties across the country. The total value is estimated at 14.6 billion rupees (€189 million, $212 million).

“We have unaccounted-for money held in the states of Andhra Pradesh, Uttar Pradesh and Tamil Nadu,” an election official told DW on condition of anonymity.

“We have to identify the end users but just imagine how much money and other inducements go undetected?” he added.

Though the commission has deployed thousands of expenditure observers and surveillance teams throughout India to check the flow of black money and other illegal incentives, cash continues to pour into the coffers of candidates and political parties.

For example, last week, income tax raids on the premises of the Dravida Munetra Kazhagam (DMK) in the southern state of Tamil Nadu resulted in the recovery of nearly of €2.5 million in cash packed in plastic covers with names of a district constituency marked on them.

Where is the money coming from?

Opaque financing of Indian political parties continues, despite an income declaration requirement,and although the election commission has suggested an expenditure limit on candidates, currently there is no cap on the amount a political party can spend in an election or on a candidate.

“The rise of self-financing candidates in India is worrying,” said Nikhil Dey of the Association for Democratic Reforms (ADR), an election watchdog. He said that candidates were chosen by small groups of party insiders who also bankrolled the parties.

Elections are getting expensive

Pollsters and analysts are claiming that a recently launched electoral bond schemeopens the door to legalized money laundering because it allows businesses and individuals to anonymously donate to political parties.

“Under electoral bonds, neither the recipients or donors names are disclosed. How can it improve transparency? Money comes from dubious sources,” Jagdeep Chhokar of ADR told DW.

Activists say the voting public will never know which individual, company or organization has funded which party, and to what extent.

Apart from splurging on extravagant campaigns and enticing voters with giveaways, political parties are also spending extensively onsocial media platforms. More than € 520,000 had been spent on political advertising before the elections were even announced.

Around 70 percent of this advertising has come from the ruling Bharatiya Janata Party (BJP) and its affiliated groups. According to social media analysts, in the coming weeks, parties through their army of proxies will continue to invest in various media platforms to increase their coverage.

Former chief election commissioner, Navin Chawla said that money was “throttling” democracy and candidates with illegal money had an advantage in gaining power.

“To break the power of money, it would be worthwhile to explore the possibilities of public funding in elections,” Chawla told DW. “India should take a cue from countries like Mexico, where election authorities allot campaign time and space on media for each candidate and party,” he added.

Elections in India are drawn-out affairs because of the need to protect polling stations and accommodate the country’s 900 million eligible voters.

The 2019 election will be spread over 7 phases beginning on April 11 and ending May 21. Before the votes are counted on May 23, India’s political parties and their rich candidates, will have spent millions on campaigning. The question is, whether the polls are for the Indian people, or simply another way to secure more wealth.