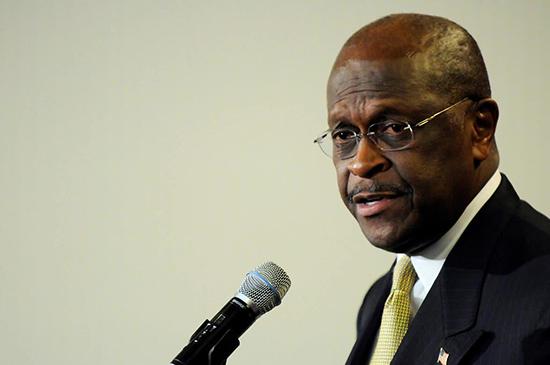 Cain, himself a former Republican presidential candidate and a long-time conservative activist, chairs America Fighting Back PAC, a political action committee created “by a group of President Trump’s most committed supporters,” according to the group’s website. Its mission is to fight “disrespectful, dishonest and destructive news” about Trump and bolster a movement of voters to fight for his reelection in 2020.

Trump, who described Cain as “a friend” on Thursday, said he plans to nominate the former head of Godfather’s Pizza to one of two vacancies on the Fed’s seven-member Board of Governors. Trump just two weeks ago said he would nominate conservative economic commentator Stephen Moore to the other vacant seat on the Fed’s board.

Trump’s plan to nominate an overt loyalist for a spot on the Fed board comes as Trump over and over again lambastes the central bank for raising interest rates four times last year and could checker the Fed’s long-cherished standing as an independent, apolitical body. Moore is also a longtime Trump ally who has joined him in criticizing last year’s rate hikes.

Cain was a Republican candidate for president in 2012 before dropping out amid allegations by several women of sexual harassment, which he has vehemently denied.

His America Fighting Back PAC has raised $347,000 during the current election cycle, according to the Center for Responsive Politics.

At least $190,500 of that has gone to Canton, Ohio-based RRTV Media for television advertising in support of Trump, filings with the Federal Election Commission show. The total includes $10,000 just weeks before Cain met with Trump to discuss the Fed job on Jan. 30, and another $9,000 in early March.

Cain appears to be the only one of Trump’s Fed nominees so far to have actively raised funds for his benefit. He has not individually made any contributions to Trump’s campaign.

A campaign solicitation email signed by Cain was circulated on Feb. 5, less than a week after his interview with Trump. Reuters received a copy of the email directly.

“Friend, I couldn’t stand to see our President and his family abused and attacked by the mainstream media and Washington swamp any longer,” the email began.

Floyd Brown, a conservative activist who co-chairs the PAC with Cain, said in an email that when Cain learned about Trump’s interest in appointing him to the Fed, he voluntarily “stepped away from day to day involvement with the PAC… (and) has let us know he will resign if nominated.”

Brown said the Feb. 5 fundraising email was likely approved before Cain’s meeting with Trump, after which “he immediately ceased his efforts.” The PAC’s TV ads were also changed to remove Cain from them, Brown said.

Cain, whose Twitter feed continues to be chock full of partisan support for Trump and opposition to his Democratic rivals, did not respond to requests for comment.

Fed officials assiduously guard their political independence, seen as crucial for its ability to steer the economy. Close ties with politicians have led central banks in other countries to keep monetary policy too loose, eventually stoking inflation.

Trump has stridently criticized the Fed’s interest rate hikes, saying they have hurt the economy.

Cain’s political fundraising could ignite criticism from legislators. The central bank’s Washington-based board is picked by the president and confirmed by the U.S. Senate.

The members of the Board of Governors and the president of the New York Fed are permanent voters on the U.S. central bank’s policy-setting committee, while four of the remaining 11 presidents of the regional Fed banks serve on a rotating basis.

Donations to political candidates by sitting Fed governors are extremely rare, though they are generally allowed under rules which govern the political activities of top Fed officials and other federal employees. Soliciting political contributions is prohibited under those same rules.

Quarles has donated frequently to Republican candidates over the years. His most recent donation, according to the Federal Election Commission, was $35,000 to the National Republican Senatorial Committee in November 2016. That was about seven months before he was picked by Trump for the Fed.

Powell, who first became a Fed governor in 2016 as an appointee of President Barack Obama, has not made a federal political donation since 2008, when he gave $28,500 to the Republican National Committee.

Bowman’s most recent political donation was $500 to Republican Mitt Romney for his presidential run in 2012, FEC records show.