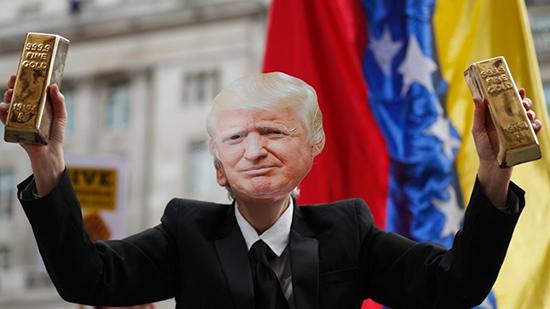 The war in Syria has much in common with the political crisis gripping Venezuela, where outside players try to meddle in domestic affairs and undermine sovereignty, Syrian President Bashar Assad told Venezuela’s Foreign Minister.

“What is happening in Venezuela is similar to the developments in Syria,” Bashar Assad told Jorge Arreaza during his visit to Damascus, as quoted by Russian media. Those interfering in both crises seek “hegemony” over Syria’s and Venezuela’s sovereignty, Assad claimed.

Slamming the US-led “flagrant interference” in Venezuela’s domestic affairs, the Syrian president said sanctions and embargoes became playbook examples of pressuring “anyone who does not adhere to their policy.”

Arreaza visited Damascus while touring other countries in the region, including Turkey and Lebanon.

Earlier this year, opposition leader Juan Guaido declared himself interim president, garnering unconditional support and recognition from a series of states, including the US and other Western powers. Washington has even mulled the so-called “humanitarian intervention” in order to remove the unwanted government of Nicolas Maduro from power.

The Syrian conflict started on the heels of anti-government demonstrations inspired by the 2011 Arab Spring unrest. Protests erupted in several major cities, with opposition protesters demanding that Assad step down. Some of the anti-government groups took up arms and the violence rapidly escalated, sending the country into civil war. Most Western countries unambiguously supported anti-Assad factions, declaring that the president has “lost” his legitimacy. Militant groups took over control of vast parts of Syria during the civil war chaos and the rise of Islamic State and other terrorists.

A large portion of these so-called “moderate rebels,” backed and funded by the West while fighting the Syrian Army, turned out to be radical Islamist militants. Even the US had to admit its training program of the Syrian opposition fighters had failed as it proved difficult to find enough “moderates,” and some of those who did receive training infamously gave up hardware and arms to terrorist groups, including an Al-Qaeda affiliate.