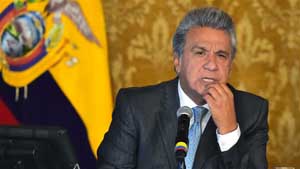 In a tweet, Wikileaks quoted a high-level Ecuadorian government source as saying that Julian Assange could be imminently kicked out of the London embassy and that Quito has an agreement with the UK to arrest him.

WikiLeaks warned in a tweet on Thursday that its founder “will be expelled within ‘hours to days.’”  The government will use the pretext of a scandal engulfing President Lenin Moreno to oust Assange, a “high level source” in the Ecuador government told WikiLeaks.

Moreno has accused WikiLeaks of leaking documents allegedly implicating him and his family in a corruption scheme with a Panamanian investment firm, INA Investments Corp.  WikiLeaks has denied being behind the leaks and no documents related to the scandal appear on its website.  Moreno said the alleged leak by WikiLeaks is a breach in a “protocol” agreement with Assange that allows him to remain in the London embassy in exchange for his public silence on all political matters.

Because of this so-called “breach,” Assange will be made to leave the embassy and would be arrested by British authorities. Assange has been a refugee inside the embassy since 2012, fearing that if he were to be arrested the UK would extradite him to the United States to stand trail for publishing classified information.