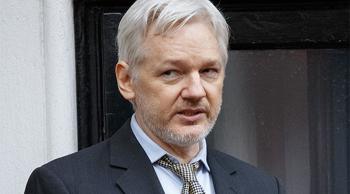 Supporters of WikiLeaks and Julian Assange are making their voices heard, despite the institutions united to silence them, after reports that the WikiLeaks founder will be expelled from the Ecuadorean embassy in “hours to days.”

A live feed of the front of the Ecuadorean embassy in London shows several tents pitched around the entrance as supporters stand vigil for the besieged journalist, who has become little more than a prisoner in the embassy in which he sought political asylum seven years ago. “NO EXPULSION” is spelled out in LED lights on the sidewalk in front of the embassy, while numerous cameras are positioned across the street.

WikiLeaks tipped the public off to Assange’s pending expulsion – within “hours to days,” according to a high-level Ecuadorean source – on Thursday, confirming that the Ecuadorean government would use the release of the INA Papers, which implicate President Lenin Moreno and his family in extensive corruption, as a pretext for revoking his asylum.

While WikiLeaks did not publish the documents, Moreno has blamed the outlet – and Assange – for his flagging support at home, complaining to anyone who will listen that the journalist has “violated” his asylum agreement.

BREAKING: A high level source within the Ecuadorian state has told @WikiLeaks that Julian Assange will be expelled within “hours to days” using the #INAPapers offshore scandal as a pretext–and that it already has an agreement with the UK for his arrest.https://t.co/adnJph79wq

A second Ecuadorean government source has since confirmed the original report. Assange was granted Ecuadorean citizenship in January 2018 and, while it is assumed that after being arrested by UK authorities –for jumping bail on charges which have since been withdrawn– he would be extradited to the US, where an indictment with his name on it was accidentally exposed last year, the Ecuadorean constitution would seem to stand in the way, as one astute commenter pointed out.

They should respect their own Constitution. pic.twitter.com/iWX8IOyKYB

Prominent supporters flocked to Twitter to post their support and urge Londoners to stand watch over the embassy.

Now is the time to observe the situation of Julian Assange in real-time and to be ready for action. Frequently check for updates by @Wikileaks on the escalating situation and let your friends know too. We must #ProtectJulian if telling the truth is supposed to be the right thing.

WikiLeaks reports that Julian Assange is on the verge of being expelled from the Ecuadorean Embassy in London. Please fill the street outside the embassy and protect him, and show solidarity with a courageous man, whose struggle ought to touch us all. https://t.co/xzZKroYJL9

Word reaches me media amassing outside Ecuadorian embassy. Can only mean #JulianAssange faces impending extradition – #ProtectJulian and get down there now! @wikileaks

While others called US, UK and Australian authorities out on their hypocrisy.

So let me get this straight @realDonaldTrump@DonaldJTrumpJr@PressSec, you guys are cool with Julian Assange being arrested while corrupt assholes like Clinton and Comey aren’t? Good to know.

.@10DowningStreet
This is wrong. The only crime Julian Assange has committed is telling the TRUTH… about LIES & LIARS. That’s not a crime except under tyranny. Pick up the phone, tell @POTUS this is OUR country, OUR soil, & we don’t crap on press freedom. Do it now. Please. https://t.co/CLapqMAtOd

Just called my local member @markdreyfusQCMP and asked him urgently but politely to get to work on bringing our citizen Julian Assange home or securing him safe passage. I encourage all Australians to do the same with their own MPs. #ProtectJulian#FreeAssage#auspolhttps://t.co/f0SiINGgkQ

WikiLeaks has posted white papers to each involved government and debunked the linking of Moreno’s domestic misfortunes to any action by Assange, pointing out that Fidel Narvaez – the former Ecuadorean consul to London – has said Moreno is merely seeking “a false pretext” to end the journalist’s asylum and “yield to US pressure.”

Fidel Narváez, who was Ecuador’s consul to London until 2018, bluntly warns that “the government seeks a false pretext to end the asylum and protection of Julian Assange.” Narváez wrote that Moreno is using the #INApapers offshore scandal as a pretext to “yield to US pressure”. pic.twitter.com/Y3SMNr5ol9