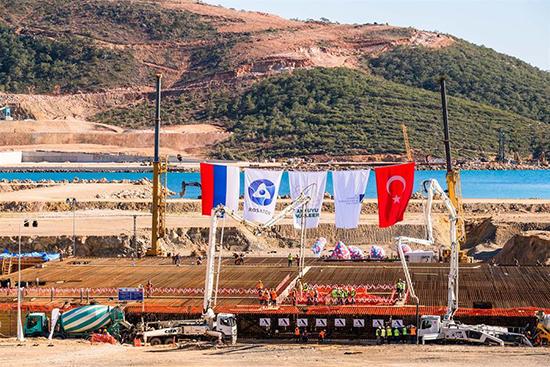 A one-year milestone in the construction of the Akkuyu nuclear power plant (NPP) is indicative of the successful cooperation between the partner countries to the plant; Russiaand Turkey, the plant’s project company, Akkuyu Nuclear announced on April 5.

On March 8, the laying of the foundation for the first reactor of the NPP was completed in line with the International Atomic Energy Agency’s safety standards and Turkey‘s national requirements, according to the company.

In addition, the operating company is awaiting the operation permit from the Ministry of Transport and Infrastructure of Turkey to begin construction of the Eastern Cargo Terminal that will provide equipment to the plant.

Progress has already been made for the third reactor with the submission of the necessary documentation for the unit’s construction license to the Turkish Atomic Energy Authority.

Anastasia Zoteeva, chief executive officer of Akkuyu Nuclear, a subsidiary of Russian state atomic energy corporation Rosatom, hailed the plant’s activities during the first year of construction as a success noting that 70 percent of the plant’s entire site is ready, and the remaining works will be finished by the end of the year.

Nonetheless, she cautioned that there is a lot of work ahead.

“Works planned for 2019 include the establishment of foundations for the technical and nuclear infrastructure of units 1 and 2, under the effective license and permits granted. We rely on our Turkish partners working together with us on site. These first active year results prove we can do things efficiently together. As Rosatom, we believe the ability to speak common languages is of great value, and the Akkuyu project dynamics is also evidence of this,” she said.

The intergovernmental agreement was signed between Russia and Turkey in May 2010 for the plant that will consist of four VVER-1200 power units with total installed capacity of 4,800 megawatts.