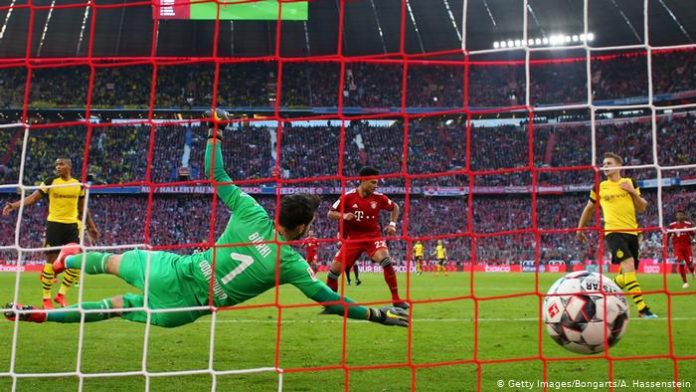 Bayern Munich emphatically beat Dortmund, RB Leipzig secure an important win in Leverkusen and Schalke ask VAR-related questions on Twitter. Catch up with all the top talking points from Matchday 28 in the Bundesliga.

– Bayern Munich are back on top of the Bundesliga after a 5-0 thumping of title rivals Borussia Dortmund. The Black and Yellows travelled to Bavaria with high hopes of dealing a blow in the title race – but Bayern struck harder and quicker. On five separate occasions. The defeat doesn’t just leave BVB one point behind Bayern with six games to play, it will also have left a pyschological scar, such was the totality of the defeat and Dortmund’s inferiority in every department.

– Two of the Bundesliga’s most offensive teams went head to head in the Rhineland and didn’t disappoint as RB Leipzig ran out 4-2 winners over Bayer Leverkusen. The Red Bull-backed outfit twice had to come from behind against Peter Bosz’s Werkself but ultimately wrapped up all three points thanks to some impressive finishing from Timo Werner and Cunha, keeping them on course for a return to the Champions League.

– Eintracht Frankfurt left it late against Schalke in a match which was more notable for its controversial VAR decisions than its quality of football. After the video assistant surprisingly opted not to penalize Schalke’s Steven Zuber for a foul on Ante Rebic, he did spring into action in the eighth minute of injury time, judging Daniel Caligiuri to have handled in the box. Luka Jovic converted to seal a 2-1 win and keep Frankfurt in fourth and unbeaten in 2019.

– Friedhelm Funkel’s players have added another three points to their already impressive league campaign with an away win at Hertha Berlin. Benito Raman scored a brace for the Fortuna Düsseldorf side, with Liverpool loanee Marko Gruijic temporarily equalizing for Hertha. With 37 points, Fortuna Düsseldorf are tenth in the Bundesliga, and are as good as safe. Not bad for one of the league’s top relegation candidates.

– Unlike Düsseldorf, the situation at Hannover 96 couldn’t be worse. With six defeats on the bounce, Thomas Doll’s players were hoping to get some points away at Lower Saxony rivals Wolfsburg. And it briefly looked like it could be the case, as Hendrik Weydandt gave the away side the lead on the 30th minute. However, that lasted less than a minute. Renato Steffen equalized the score for the home side, only to later turn the game around with another goal on the 71th minute. Jerome Roussillon added another one for Wolfsburg seven minutes later. Thomas Doll’s side is currently last, with seven points separating them from safety.

– Still at the bottom of the table, Stuttgart and Nuremberg have met for a six pointer in the fight against relegation. It was the guests who went ahead on the 42nd minute after Matheus Pereira pushed the ball into the net from close range. However, after piling on the pressure, Stuttgart managed to get the equalizer a quarter of an hour before the final whistle through Ozan Kabak. Both Stuttgart and Nuremberg remain in deep trouble, and are four and eight points away from safety respectively.

– “Mainz 05” became “Mainz 5-0” on Friday night as the Zerofivers thrashed Freiburg to all but guarantee their Bundesliga safety for another season. Jean-Philippe Mateta scored a hat-trick for the hosts after Jean-Paul Boetius had capitalized on an error from Alexander Schwolow to give them the lead – but the scoreline was very harsh on Freiburg, who were actually the better side for large period.

– Hoffenheim’s bid for European football continues. Julian Nagelsmann’s players travelled to an away game at struggling Augsburg knowing a win is a must, and they delivered with an emphatic 4-0 win. Ishak Belfodil scored an impressive hattrick, with Andrej Kramaric adding his 15th goal of the season, his fifth in four games. A Europa League place is certainly in reach.

– Werder Bremen came into the away game against Borussia Mönchengladbach as one of the league’s most in-form teams, and on the back of an impressive away win in the DFB Pokal quarterfinal at Schalke. Florian Neuhaus put Gladbach ahead, but  Davy Klassen headed the ball home to earn a deserved point. We’re in April, and Werder Bremen are still unbeaten in 2019.

“I want my players to play with the same joy that they have with their wives at home”
– Bruno Labaddia’s instructions to his Wolfsburg players raised eyebrows.

“VAR doesn’t give Frankfurt a penalty. We’re not sure why not.”

“We were catastrophic, our defending was catastrophic, we didn’t exert a single ounce of pressure. We can’t accept that. We have different expectations. We can’t complain when we play like that and get beat.”
– Borussia Dortmund captain Marco Reus with an honest appraisal

“We wanted to show right from the start that we’re at home so we wanted to be aggressive. We’re at our best when we’re active. We were concentrated and determined and we’re also a very good team.”
– Mats Hummels and Bayern Munich did everything right

With five goals in the last four games, Andrej Kramaric continues to impress.

Another week, another VAR controversy in the Bundesliga. After Eintracht Frankfurt attacker Ante Rebic had clearly been fouled in the box, the referee decided to have a look at the VAR screen. His decision: No penalty. Schalke’s Twitter account admitted that even they did not understand the decision.

The second half of the game between Hertha Berlin and Fortuna Düsseldorf started eight minutes late due to a problem in the referees’ communication system.

Stuttgart’s players were welcomed by their fans with an impressive choreography, calling for them to “show fighting spirit for our colors” in the game against fellow strugglers Nürnberg.

More than 7,000 Borussia Dortmund fans have travelled to Munich for their club’s top-of-the-table clash against Bayern. Despite the 0-5 thrashing, they kept on supporting their team with constant singing.