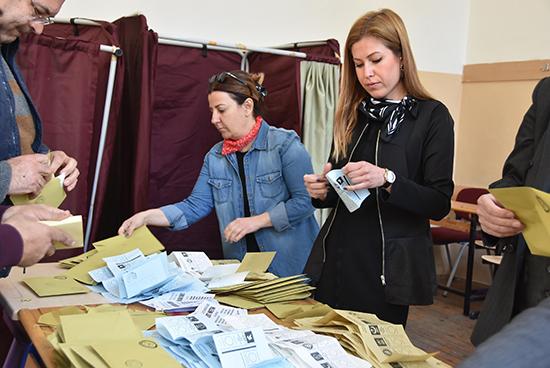 The Supreme Election Board (YSK) is the “boss” of the vote counting process, which continued for a seventh day in Istanbul on April 7 since the March 31 local elections, Turkey’s Justice Minister Abdulhamit Gül has said, with the ruling party applying to the board for a recount of all votes cast in all districts of Istanbul.

“All the process is proceeding under the administration and control of the election commissions and before the eyes of the representatives of all political parties. The Supreme Election Board is the boss and owner of this task,” Gül told the press in Ankara on April 7, in response to a statement by main opposition Republican People’s Party (CHP) speaker Faik Öztrak.

“Why are the hands of the justice minister and the interior minister in the ballot sacks?” Öztrak asked a day earlier, as invalid votes in Istanbul were being recounted over appeals by the ruling Justice and Development Party (AKP).

“The will of the Turkish nation is reflected in the ballot sacks. Everyone should pay respect to the will of the nation,” Gül said, adding that the government is not involved in the process by any means.

The CHP said on April 6 that Ekrem İmamoğlu, its candidate for mayor of Istanbul, retained his narrow lead over AKP candidate Binali Yıldırım, a former prime minister and parliament speaker, after recounts in nearly half of the city’s ballot boxes.

İmamoğlu had a lead of 17,919 votes after recounts of around 49 percent of ballot boxes, the party said. That margin remains very slim in an election where both candidates polled over 4 million votes.

However, AKP deputy chair responsible for the elections, Ali İhsan Yavuz, said the gap narrowed to 16,442 as of April 7, adding that his party would demand from the YSK a total recount in all 38 districts of Istanbul.

“There is an organized irregularity. There is an abuse,” he said, implying a plot in vote counting.

Öztrak said the party was confident that the initial results, showing victory for İmamoğlu, would stand.

“We won’t let the election, which we have won, be stolen by anyone,” he said.

The YSK is the final decision-maker, President and AKP chairman Recep Tayyip Erdoğan said on April 5.

The justice minister also commented on a recent idea by Devlet Bahçeli, the leader of the Nationalist Movement Party (MHP) which teamed up with the AKP under the People’s Alliance for the local elections.

Bahçeli had suggested on April 4 a new system that voters would elect a metropolitan mayor, who would later appoint mayors for the districts of the provinces.

“These are of course valuable ideas,” Gül said. “This is why legislation and parliament exist,” he said.