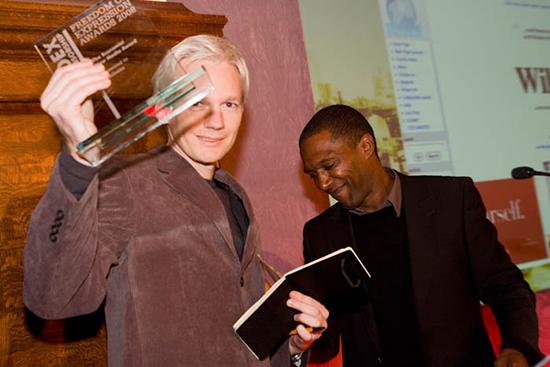 When someone says “Assange isn’t a journalist”, they aren’t telling you what Assange is. They’re showing you who they are, says Caitlin Johnstone. Plus Ray McGovern answered the question on CNN nine years ago.

As discussed Saturday, whenever Julian Assange is in the news and people are defending him you always see a bunch of hyper-emotional empire loyalists running around online trying to manage the narrative about him. One of the most common talking points which comes up is that Assange is “not a journalist”.

The reason this talking point comes up, of course, is because the WikiLeaks founder is besieged by powerful forces who are attempting to imprison him for publishing inconvenient facts about them, and his defenders often voice their concerns about what this means for the future of press freedoms. The completely baseless claim that Assange is “not a journalist” is used in an attempt to defuse the argument that his prosecution by the U.S. government could lead to the same fate for any news media outlet which publishes leaks on the US government anywhere in the world. If he’s not a journalist, then his prosecution sets no precedent for real journalists.

This argument, if you can call it that, is fallacious for a number of reasons. For starters, as The Intercept‘s Glenn Greenwald explained last year, there’s not any legal distinction in the U.S. Constitution between news media outlets like the The New York Times and an outlet which solely focuses on publishing leaks. If you set the precedent with any publisher, you’re necessarily setting it for all of them. Greenwald writes the following:

To begin with, the press freedom guarantee of the First Amendment isn’t confined to “legitimate news outlets” – whatever that might mean. The First Amendment isn’t available only to a certain class of people licensed as “journalists.” It protects not a privileged group of people called “professional journalists” but rather an activity: namely, using the press (which at the time of the First Amendment’s enactment meant the literal printing press) to inform the public about what the government was doing. Everyone is entitled to that constitutional protection equally: there is no cogent way to justify why the Guardian, ex-DOJ-officials-turned-bloggers, or Marcy Wheeler are free to publish classified information but Julian Assange and WikiLeaks are not.

Secondly, anyone with a functioning brain can see that Julian Assange is indeed a journalist. Publishing facts so that the citizenry can inform themselves about what’s going on in their world and what’s happening with their government is the thing that journalism is. Duh. The need for an informed citizenry is the entire reason why press freedoms are protected so explicitly under the U.S. Constitution, and publishing facts about the most powerful institutions on earth indisputably does create a more informed citizenry.

You can look at any conventional dictionary definition of the word and come to the same conclusion. Merriam-Webster offers “the public press” and “the collection and editing of news for presentation through the media”. The Oxford English Dictionary offers, “The activity or profession of writing for newspapers, magazines, or news websites or preparing news to be broadcast.” Your Dictionary offers, “the work of finding, creating, editing and publishing news, or material written and presented for a newspaper, magazine or broadcast news source.” These are activities that WikiLeaks is undeniably involved in; they collect and publish newsworthy information to be circulated by themselves and other news sources. The fact that they do their part differently (and better) than other outlets doesn’t change that.

The claim that Assange is “not a journalist” is both an irrelevant red herring and a self-evident falsehood. It is made not by people with an interest in maintaining a small and specific linguistic understanding of what the word journalism means, but by people who want to see Julian Assange imprisoned by the same government which tortured Chelsea Manning because he made them feel emotionally upset. It’s a fact-free argument made entirely in bad faith for inexcusable motives: the desire to see a journalist imprisoned for telling the truth.

When someone says “Assange isn’t a journalist”, they aren’t telling you what Assange is. They’re showing you what they are.

As early as Dec. 2010, former CIA analyst Ray McGovern on CNN answered the same question, arguing that Assange is a journalist, not a “high-tech terrorist.” McGovern was never invited back to CNN domestic service after this interview and only once more on CNN International.

Ray McGovern works with Tell the Word, a publishing arm of the ecumenical Church of the Saviour in inner-city Washington. A CIA analyst for 27 years and Washington area resident for 56 years, he has been attuned to these machinations. He is co-founder of Veteran Intelligence Professionals for Sanity (VIPS).