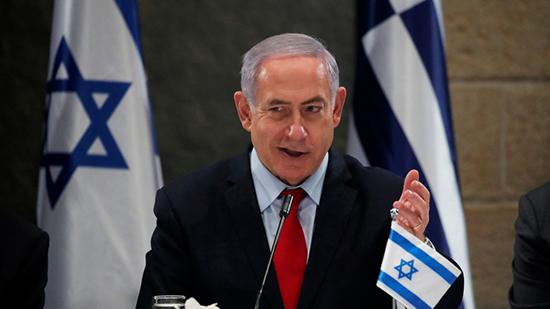 PM’s annexation remark comes just three days before election and can be seen as appeal to right-wing voters.

Israeli Prime Minister Benjamin Netanyahu pledged on Saturday to annex settlements in the occupied West Bank if he wins another term in office in a general election on 9 April.

“I will apply [Israeli] sovereignty, but I don’t distinguish between settlement blocs and isolated settlements, because each settlement is Israeli and I will not hand it over to Palestinian sovereignty,” he said in an interview on Channel 12 television.

Settlements built on land occupied by Israel in the 1967 Middle East war are under international law and their ongoing construction is seen as a major barrier to peace.

Netanyahu’s annexation remark comes just three days before the election and is likely an appeal to right-wing voters who are overwhelmingly supportive of the settler movement.

It was not clear whether Netanyahu’s annexation remarks referred to all of the West Bank or only parts of it.

“A Palestinian state will endanger our existence and I withstood huge pressure over the past eight years. No prime minister has withstood such pressure. We must control our destiny,” Netanyahu said.

In a previous interview broadcast on Friday, Netanyahu said he told US President Donald Trump he would not remove settlements or people as part of a future American peace plan.

“I said there shouldn’t be the removal of even one settlement” from the occupied West Bank, Netanyahu told Israel’s Channel 13 television.

Washington is expected to unveil proposals for Israeli-Palestinian peace some time after Tuesday’s Israeli election in which Netanyahu is seeking a fifth term.

The Israeli prime minister was asked if he was familiar with the details of the US plan, known as the “deal of the century”, replying he knew “what should be in it”.

Along with settlements, “our ongoing control of all the territory west of the Jordan” River was a further condition set by the Israeli premier for any US-led peace initiative.

Netanyahu said he informed Trump not “even one person” would be evicted from a settlement.

The United States broke with decades of international consensus last month by recognising Israeli “sovereignty” over the occupied Golan Heights, territory Israel captured from Syria and recognised as part of the latter by the international community.

Trump said on Saturday he made the controversial decision to recognise Israel’s 1981 annexation of the Golan Heights after getting a quick history lesson during a conversation on a different subject.

Speaking at the Republican Jewish Coalition gathering in Las Vegas, Trump said he made the snap decision during a discussion with his top Middle East peace advisers, including the US ambassador to Israel, David Friedman, and son-in-law Jared Kushner.

“I said, ‘Fellows, do me a favour. Give me a little history, quick. Want to go fast. I got a lot of things I’m working on: China, North Korea. Give me a quickie,” Trump said to laughter from the Las Vegas crowd.

“‘How do you like the idea of me recognising exactly what we’re discussing?’” said Trump, recounting the conversation.

More than 400,000 Israelis live in West Bank settlements as part of its military occupation of the territory, while a further 200,000 live in settlements in occupied East Jerusalem, which Israel has annexed in a move never recognised by the international government.

While Netanyahu has a close relationship with the US president, Palestinian President Mahmoud Abbas cut off relations with Washington after Trump declared the disputed city of Jerusalem Israel’s capital in December 2017.

The Palestinians say the US government’s pro-Israel bias meant it could no longer lead peace negotiations between them and Israel.

Israeli-Palestinian peace efforts have been at a standstill since 2014, when a drive for a deal by Barack Obama’s administration collapsed.