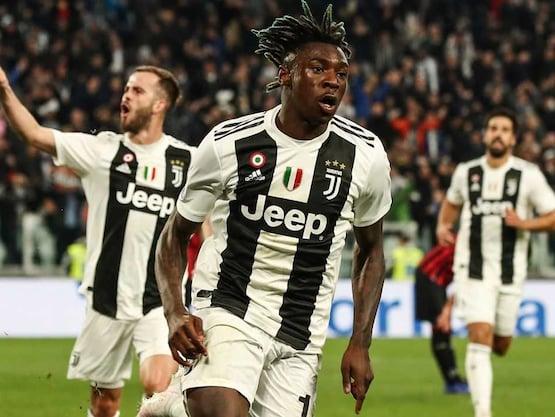 Moise Kean came on as a substitute and fired in the winner on 84 minutes for his fifth goal in as many league games.

Teenage sensation Moise Kean scored the winner to put Juventus one step away from an eighth consecutive Serie A title on Saturday as a 2-1 comeback win over AC Milan pushed the champions 21 points clear at the top. Kean — the victim of racist abuse earlier this week in Cagliari — came on as a substitute and fired in the winner on 84 minutes for his fifth goal in as many league games. The Turin giants will seal a 35th Scudetto on Sunday with seven matches to spare — the earliest any team has won Serie A — if second-placed Napoli lose at home against Genoa.

Juventus were playing without injured striker Cristiano Ronaldo, recovering from a thigh injury, as they prepare for their Champions League quarter-final, first leg against Ajax.

But 19-year-old Kean has stepped up in the absence of the Portuguese superstar who is battling to be fit for Wednesday’s game in Amsterdam.

“Even today Kean came on and scored, he is very good at that,” said Allegri of the youngster who also scored twice in two Euro 2020 qualifiers for Italy.

“He’s a young man who is doing very well, but let’s leave him to be calm.

“Will he play on Wednesday (against Ajax)? We’ll see, the substitutes are important as we saw today.”

Krzysztof Piatek had put visiting AC Milan ahead five minutes before the break with his 21st goal of the season. Paulo Dybala pulled the hosts level from the spot on the hour mark.

For Milan, the defeat further damages their Champions League ambitions with just one point from their last four Serie A games.

Gennaro Gattuso’s side are fourth but can be overtaken by Atalanta, who are one point behind and travel to third-placed Inter Milan on Sunday.

Roma, also targeting a Champions League berth, got back winning with captain Daniele De Rossi scoring the only goal against Sampdoria, to sit sixth, equal on points with Atalanta.

The visitors had come out firing.

Sami Khedira came on for the first time since heart surgery a month ago, replacing fellow German Emre Can who went off early with an ankle sprain.

Milan were denied a penalty when Alex Sandro handled Hakan Calhanoglu’s cross. The referee decided it was unintentional after a VAR review.

Minutes later, Piatek broke through to beat fellow Pole Wojciech Szczesny following a blunder from former Milan defender Leonardo Bonucci, who had been widely criticised for comments he made over the racist abuse Kean suffered in Cagliari.

Tiemoue Bakayoko pounced on his sloppy pass to burst through for Piatek to score.

Kean came on for Dybala and 20 minutes later delivered the winner as Bonucci rushed to celebrate with the striker he had blamed for partly inciting a barrage of racist abuse in Sardinia.

The captain forced the ball in on 75 minutes after a Patrik Schick header was saved.

Torino dropped out of the Europa League places with a goalless draw at Parma, as Lazio, with a game in hand, look to stay in the Champions League chase at home against Sassuolo on Sunday.