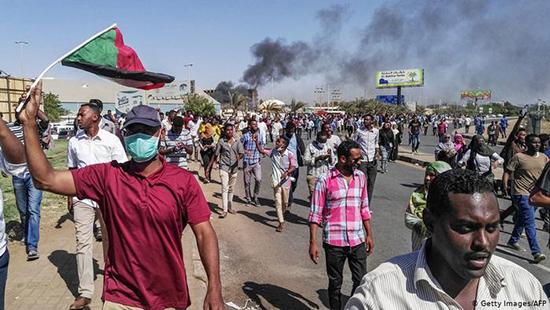 Sudan’s President Omar al-Bashir has rejected calls to step down amid growing popular pressure against his rule. For thousands of protesters, the military may be the only option to force him out of office.

Sudanese security forces on Monday fired tear gas at thousands of demonstrators camping outside the army’s headquarters in the capital Khartoum for a second night, witnesses said.

They reported that a number of pickup trucks carrying security forces charged towards protesters at the site in the early hours of the morning.

Thousands of people have been rallying outside the army complex  since Saturday, calling on the military to back their demand for President Omar al-Bashir to step down. The complex also houses the Defense Ministry and the official residence of Bashir, who has been in power for almost 30 years. They say his government’s economic mismanagement is to blame for rising food prices and fuel shortages.

Security forces killed at least five protesters during the weekend, including one medic, opposition representatives said on Sunday.

State officials say 32 people have died since protests erupted in the east African country after a government decision to triple the price of bread in December. Human Rights Watch, however, has put the death toll at 51, including medics and children.

The EU voiced concern at Khartoum’s response to the protests. “The people of Sudan have shown remarkable resilience in the face of extraordinary obstacles over many years,” the EU’s foreign affairs arm said. “Their trust must be won through concrete action by the government.”

Protest organizers chose April 6 to begin the rally outside the army headquarters, the most heavily guarded compound in the country, to mark the 1985 uprising that toppled the regime of President Jaafar Nimeiri.

About awarding Garo Paylan with Nobel Peace Prize 2020. The Appeal of the Head of the International women’s union of Hamshen Armenians