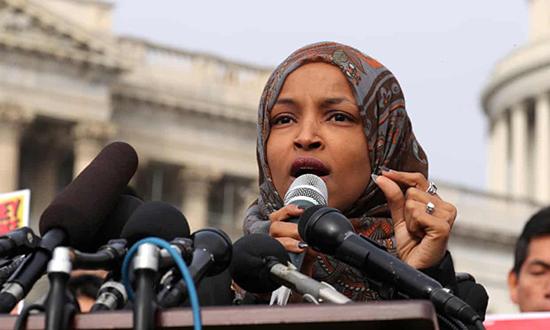 Donald Trump and Fox News are coming under fire for contributing to a climate of Islamophobia, following the arrest of a supporter of the president who threatened to kill Ilhan Omar, a Democrat from Minnesota who was one of the first Muslim women elected to the US Congress.

Patrick Carlineo, from Addison, New York, was arrested on Friday and charged with making a threatening phone call to Omar’s office. According to the FBI, Carlineo told a staff member: “Do you work for the Muslim Brotherhood? Why are you working for her, she’s a fucking terrorist. I’ll put a bullet in her fucking skull.”

Though Fox News was not mentioned in the complaint against Carlineo, the New York congresswoman Alexandria Ocasio-Cortez drew a direct link between controversial remarks made by presenter Jeanine Pirro and the threat against Omar.

Last month Pirro attacked Omar’s wearing of the hijab, asking if it was indicative of “her adherence to sharia law, which in itself is antithetical to the United States constitution”.

In a tweet on Saturday, Ocasio-Cortez implied there was a causal link between Pirro’s comments and the death threat against Omar.

“Understand,” she wrote, “when Jeanine Pirro goes on Fox [and] rallies people to think hijabs are threatening, it leads to this.” She also appealed to people to “talk policy, not personal”.

Pirro’s show was taken off air for two weeks before she was allowed to return.

Omar herself did not rise to the provocation, though she did make her feelings known. “My Lord, forgive my people for they do not know,” she tweeted in response to reports of Trump’s speech.

Last month, in the wake of the shootings at two mosques in Christchurch, New Zealand, that killed 50 people, Omar accused Trump of whipping up the hatred that lay behind such violence. She said Trump was a president who “publicly says Islam hates us, who fuels hate against Muslims, who thinks it is OK to speak about a faith and a whole community in a way that is dehumanizing, vilifying”.

The Somali American Muslim who represents Minnesota’s fifth congressional district is one of a group of dynamic Democratic women swept into Congress in November’s midterm elections. As an outspoken critic of the Israeli government’s treatment of Palestinians, she has become a lightning rod for right wing claims of antisemitism.

She was particularly heavily rounded upon after she highlighted the lobbying work of the American Israel Public Affairs Committee, Aipac, which she implied paid US politicians to take a pro-Israeli position.

Muslim groups warned that the heated rhetoric around Islam in general and Omar in particular was creating a dangerous climate. Afaf Nasher, executive director of the Council on American-Islamic Relations, said in a statement: “The political environment, led by an Islamophobe in the White House, has normalized hate speech and emboldened bigots in their actions. The rising threat of Islamophobia and white supremacy must be taken seriously.”

According to the FBI’s criminal complaint, Carlineo made his threatening call to Omar’s office on 21 March, identifying himself by his real name. Staff alerted federal agents in the US capital.

A week later Carlineo was interviewed by the FBI at home. At first the suspect claimed he had said in the call that “if our forefathers were still alive, they’d put a bullet in [Omar’s] head”. He later insisted he had been angry and was not sure of his remarks.

Carlineo described himself as a patriot who “loves the president” and “hates radical Muslims in our government”.

He was found to have a shotgun and a .22 caliber handgun in his house.