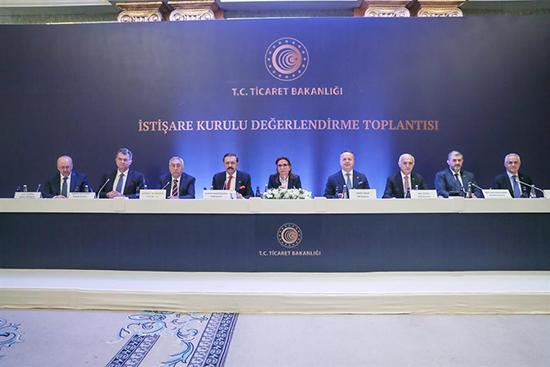 Representatives from Turkey‘s business circle on April 5 voiced their expectations for structural reform in the economic area in the upcoming less than a five-year period before the next elections.

“We see this period as an opportunity to make permanent solutions for our structural problems,” he stressed.

Hisarcıklıoğlu recalled that Treasury and Finance Minister Berat Albayrak is expected to unveil a new economic roadmap next week.

“With this roadmap, the credibility of Turkey and Turkish economy will increase with the disciplined stance in public finance and decrease in the need for external sources continuing, as well as adopting measures to support the competitiveness of the private sector,” he said.

Nail Olpak, the chairman of the Foreign Economic Relations Board of Turkey (DEİK), stressed elections have kept Turkey‘s agenda engaged in recent years, hereupon Turkeyshould focus on development and reforms.

“We will work to form a sustainable and balanced growth, durable economy by making more quality products,” he noted.

Olpak added: “We expect that structural reforms will contribute to the economy.”

Turkey is an open economy and it should make more trade and attract more foreign investment, he underlined.

Also highlighting the need for reforms in economic, political and social areas in Turkey, Kaslowski said that strengthening institutions, developing insurance sector, and increasing transparency in public finance, as well raising financial covering and fighting against the underground economy were important for financial stability.

Abdurrahman Kaan, the head of the Independent Industrialists’ and Businessmen’s Association (MÜSİAD), said: “As the business world, we wish that Turkey will focus on financial stability and development until next elections.”

In this period, economic reforms, production, investments, and exports are important issues, he added.