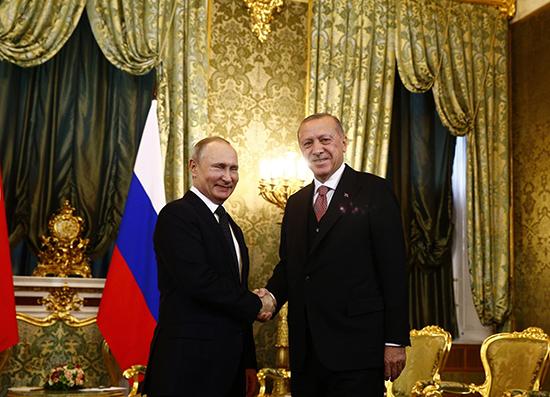 Turkey‘s president said on April 8 that Turkey and Russia both want to eliminate terrorists from Idlib, a region in northwestern Syria near Turkish borders.

“Ankara will never allow [the presence of] an entity that poses a threat to Turkish and Syrian territorial integrity,” Recep Tayyip Erdoğan told during a joint news conference with Putin at the Kremlin.

Turkish and Russian leaders met in Moscow in the latest of a series of summits aiming to boost the bilateral relations and the trade volume between the two countries.

Ankara continues to take measures on Idlib since it is a “sensitive issue for Turkey, Erdoğansaid.

“On the basis of our common understanding with Russia, we are determined to dismantle the terrorism from Syria that threatens our national security.”

stressed that Idlib must be completely cleared of terrorism for people to return safely to their homes.

“To date we have taken the steps we should take in Idlib, and we will continue to do so. Because retreat is impossible.”

Erdoğan also said that both countries are determined to eliminate the terror threats near Turkey‘s borders, adding that the terrorist groups PKK and the YPG- its Syrian branch- pose a threat like ISIL.

On Turkey‘s purchase of Russian S-400 missile defense systems, Erdoğan said that no one expects Ankara to renege on the deal, which is its national right.

Putin, for his part, said that Turkish-Russian efforts in Idlib will finally lead to eliminating the terrorist threat there.

Calling the Idlib problem “pressing,” he added that a joint Russian-Turkish monitoring center will be established.

He stressed the strengthening of cooperation between the two countries, adding that a Russian-Turkish investment fund created on April 9 will be able to attract investments.

Putin said that Russia is doing its best to ensure economic independence for both countries, including trading in national currencies with Turkey.

He called Russian-Turkish cooperation in the energy domain “strategic” and promised to complete construction of the Akkuyu nuclear plant by 2023, the centenary of the Turkish Republic.

Putin said he discussed with Erdogan the delivery of S-400 missile defense systems and other arms purchases, adding that Russia and Turkey will boost cooperation in arms.

He also said that Russian journalists will come to Turkey for an exchange program, which will contribute to stronger ties.

In another trade boost, Putin said that the visa requirement for Turkish truck drivers will be canceled in the near future.