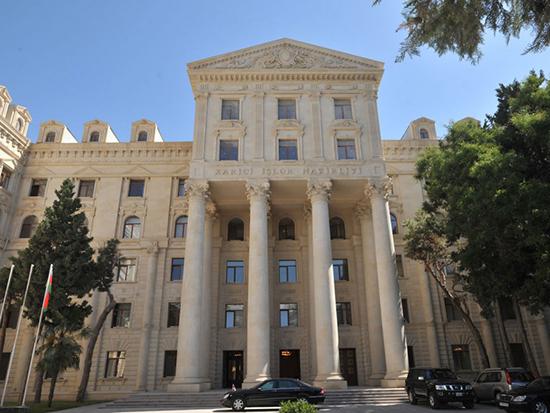 “The information presented by some media outlets these days on ‘Azerbaijan closes the corridor through its territory for NATO member states’ is not true. In order to clarify the situation, first of all we would like to note that, in terms of corridor, Azerbaijan does not give anyone, including NATO, any part of its territory. Here, we are talking about providing the members of the “Resolute Support” Mission, conducted by NATO in Afghanistan and where Azerbaijan also participates, with the opportunity to use the territory of the country, including its land, air and water spaces, for the proper transportation of goods within the framework of this mission. Such an experience has existed since 2001. In order to provide these opportunities, requests for obtaining relevant flight permits from NATO member states are considered on a bilateral basis. These appeals are considered by the Azerbaijani side based on appropriate rules and procedures, as well as the founding principles of partnership, including mutual respect for the sovereignty and territorial integrity of each other, and co-operation,” said spokesperson of Azerbaijan’s Foreign Ministry Leyla Abdullayeva.

“From this point of view, Azerbaijan, to date, has contributed to NATO’s mission in Afghanistan, as well as to the peace and security in the region at large. The USA and other NATO countries carry out their flights to Afghanistan by using the territory of Azerbaijan. On the other hand, today Azerbaijan is known as a country providing trans-regional connectivity. The transit opportunities have been created through land and water territories of Azerbaijan. The Baku-Tbilisi-Kars railway operating from 2017 and the Alat International Sea Port fully operating since last year opened new opportunities in this regard. Several NATO Member States exercise their cargo shipment to Afghanistan by using exactly these routes. As a continuation of the appreciation of all these developments, NATO Secretary-General stated at press conference in Washington, on April 4th, that Azerbaijan is a close partner of the Alliance and our country closely cooperates with NATO in establishing international peace and security. The Secretary General also noted Azerbaijan’s significant contribution to NATO’s “Resolute Support” mission by providing troops and multimodal transit opportunities, and in this respect, stressed the use of the Baku-Tbilisi-Kars railroad during transportation of logistics to Afghanistan, and its important contribution to the success of the Alliance’s “Resolute Support” mission. We would like to emphasize that the Secretary General presents the collective position of NATO member states and the mentioned statement of the Secretary General is given on these basis.

Meanwhile, the recent information leaked to the German press and accusations have led to misunderstanding, and it shows the bias position of some people. This information, which contains baseless accusations, is not based on the concrete facts. We reiterate that, based on the relevant partnership principles and according to the norms of the international law, Azerbaijan has cooperated with the NATO member states, still cooperates and is ready to continue this cooperation in the future.

The pretended campaign that we observe in the German media reports doesn’t reflect the real picture and Azerbaijan expects that the German government will address these issues respectively. Azerbaijan will continue considering the requests of NATO member states in the future respectively.