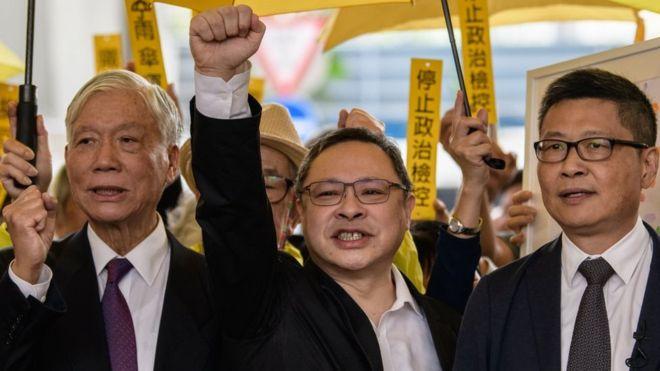 BBC.Com -Nine pro-democracy activists have been found guilty of public nuisance charges for their involvement in mass rallies which called for greater autonomy from China.

Among them are three prominent activists who are seen as the faces of Hong Kong’s pro-democracy movement.

They could be jailed for up to seven years for their part in the “Umbrella” protests in 2014.

Thousands marched demanding the right for Hong Kong to choose its own leader.

“No matter what happens today… we will persist on and do not give up,” Mr Tai had told reporters ahead of the verdict.

Mr Tai and Mr Chan were both found guilty of conspiracy to cause public nuisance and inciting others to commit public nuisance, according to local media outlets.

Mr Chu was found guilty of conspiracy to cause public nuisance.

A large crowd gathered outside the court on Thursday in support of the nine activists.

“[This] will likely embolden the government to prosecute more peaceful activists, further chilling free expression in Hong Kong,” said researcher Maya Wang in a statement to the BBC.

What were the protests about?

The protests started in reaction to a decision made by China that it would allow direct elections in 2017, but only from a list of candidates pre-approved by Beijing.

Beijing is highly sensitive about Hong Kong’s status and any calls for more autonomy from China.

The former British colony was handed back in 1997 on condition it would retain “a high degree of autonomy, except in foreign and defence affairs” for 50 years.

Many people in Hong Kong believe they should have the right to elect their own leader.

In 2014, the three activists’ calls for non-violent civil disobedience joined with student-led protests and snowballed into the massive demonstrations.

Tens of thousands of people camped in the streets and demanded the right to fully free leadership elections.

The protests became known as the “Umbrella Movement” after people used umbrellas to shield themselves from tear gas fired by police to disperse the crowd.

Protesters accused the Chinese government of breaking its promise to allow full democracy in Hong Kong, and of encroaching more and more on the region.

But the number of protesters dwindled to just a few hundred as the weeks dragged on and they ultimately failed to achieve their goal.