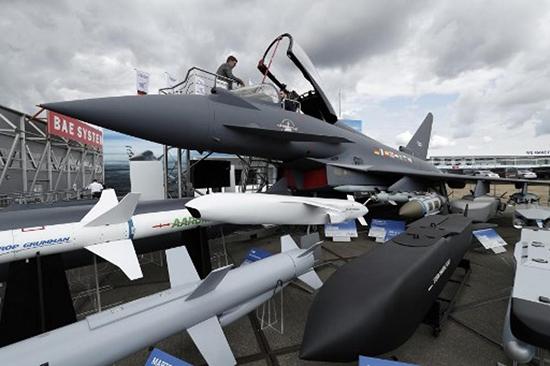 The British government met representatives of the country’s largest arms manufacturer to discuss its response to the murder of Jamal Khashoggi within weeks of the crime.

The UK’s International Trade Secretary, Liam Fox, met with representatives of BAE Systems to talk about how the government’s reaction could impact the corporation’s relations with Saudi Arabia.

A one-line confirmation that the meeting was held on 29 October, “to discuss the UK government response to the killing of Khashoggi and BAE Saudi interests”, has been disclosed by the Department for International Trade (DIT).

Although the department said it was making that disclosure in line with its commitment to government transparency, no further details were forthcoming. Neither the DIT or BAE answered questions from Middle East Eye.

Khashoggi, a critic of the direction Saudi Arabia has been taking under the crown prince, Mohammed bin Salman, was murdered after walking into the country’s consulate in Istanbul on 2 October. His body was then dismembered and his remains have not yet been found.

The meeting with BAE came less than four weeks after the murder and a few days after the Riyadh investment forum known as “Davos in the Desert” was held, which Fox and many other politicians and business leaders had declined to attend.

The disclosure that the meeting took place comes at a particularly sensitive moment for both BAE Systems and the DIT, with campaigners about to renew a legal challenge to British arms exports to Saudi Arabia for use in the civil war in Yemen.

Around 14 percent of the corporation’s sales were to Saudi Arabia in 2018, while the UK has licensed £4.7bn ($6.1bn) worth of arms sales to Saudi forces since March 2015, when a coalition led by the Gulf kingdom intervened in the civil war.

The UK has licensed £4.7bn worth of arms sales to Saudi forces since March 2015

The UK has supplied military aircraft and a steady supply of bombs and missiles, components, training and technical support. As of February, there were 17 UK military personnel embedded with Saudi forces, including three in the Saudi Air Operations Centre.

In late 2018, Human Rights Watch reported that around 6,900 civilians had been killed and 11,000 injured during the war – mostly by the Saudi-led coalition – while the charity Save the Children estimates that as many as 85,000 children under the age of five have died from hunger and disease.

On Tuesday, the Court of Appeal in London will begin to hear an appeal by a UK NGO, the Campaign Against Arms Trade, which is attempting to overturn a 2017 ruling by a lower court that permitted the UK to continue to export arms to Saudi Arabia for use in Yemen.

CAAT argues that the exports should be halted as a number of bodies, including UN Panel of Experts and the European Parliament, have concluded that Saudi air strikes are causing disproportionate harm to civilians, in violation of international humanitarian law.

‘Narrowly on the wrong side’

Earlier this year the international relations committee of the UK Parliament’s upper house, the House Of Lords, also concluded that the UK is “narrowly on the wrong side” of international humanitarian law, and should be prepared to suspend some exports.

UK government lawyers are questioning the reliability of the reports on which human rights groups, NGOs and international panels have reached their conclusions and argue that Britain has a robust system of arms export controls.

In the US, Congress has approved a resolution to end American assistance for Saudi Arabia’s war in Yemen. The resolution is likely to be met by a veto from President Donald Trump.

The US is by the far the largest exporter of arms to Saudi Arabia, and is estimated to have struck at least $68bn worth of deals since March 2015.

A number of countries, including Germany, suspended arms sales to Saudi Arabia following the murder of Khashoggi.

DirecTV’s Exit and the Complexities of Venezuelan Politics