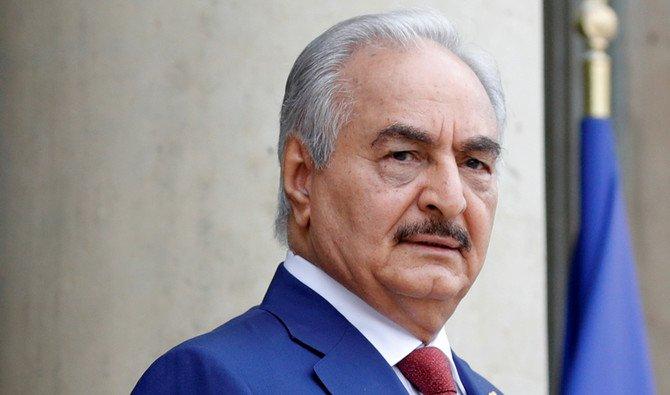 As General Khalifa Haftar’s offensive closes in on the Libyan capital of Tripoli, US troops have withdrawn, leaving the UN-supported Prime Minister Fayez al-Serraj on his own. A scholar told Sputnik that Haftar is the man the international community wants, but they only want him so he’ll resume production in Libya’s vast oil fields.

Once the most affluent country in Africa, Libya has been wracked by chaos and civil war since the catastrophic NATO-directed intervention in 2011 that overthrew longtime leader Muammar Gaddafi, resulting in his murder, the destruction of the country and its splitting into rival militant factions.

Serraj is leader of a nominal and flimsy Government of National Accord formed under United Nations aegis in 2015, but his basis of power is the parliament in the eastern city of Tobrouk — not the western metropolis of Tripoli, where his presidential council rules from.

Haftar, who heads the Libyan National Army, which is the army of the Tobrouk parliament, has presided over the army since the renewed civil war in 2014. In the process he’s conquered large parts of the country, including Benghazi, the second-largest city, in July 2017, and most recently the oil fields in the southwest of the country. Now he’s turned on Serraj, ordering an advance on Tripoli on April 4, and militias that remain loyal to Serraj are converging on Tripoli to defend the government.

Vijay Prashad, director of the Tricontinental: Institute for Social Research and author of the book “Arab Spring, Libyan Winter,” told Radio Sputnik’s Loud and Clear Monday that “the Europeans have had their eye” on Libya’s low-sulfur petroleum, which requires minimal processing, “for a very long time,” and Haftar is the man they’ve selected to turn the taps back on, since Washington seems unlikely to budge on its new trade sanctions against Iran.

​”In 2015-16, the United Nations entered a process with various factions inside Libya to create a Government of National Accord — that’s the government led by Mr. al-Sarraj, who is currently sitting in Tripoli, alongside the fifth UN envoy to Libya, Ghassan Salame. They met this morning, Monday morning, just when the aircraft of Khalifa Haftar bombed the main airport in Tripoli, that’s the Mitigar Airport,” Prashad told Sputnik.

“This UN government that has been sitting in place for the last four years has been largely interested in maintaining its so-called ‘international support’ — in other words, support from the West — and hasn’t been able to take care of the basic needs of the population, including electricity, water, stability and so on. It’s backed by a series of militias, which were the product of NATO’s war in 2011.”

“Mr. Haftar, on the other hand, is a very interesting character. You know, he lived about 10 minutes from CIA Headquarters in Langley, Virginia, between 1987 and 2011. He was basically held in place for the eventuality that he might be needed. In 2011, he arrived in Benghazi, hoping, in fact, to take over the rebellion. At that time, it’s important to remember that the Qataris, the Emirate of Qatar, was really on the front foot. And they put their man to be in charge of Libya — that’s Mahmoud Jibril.”

Jibril served as the country’s interim prime minister through most of 2011, while forces loyal to Gaddafi’s government remained on the battlefield. He resigned after the fall of Sirte, the government’s last holdout, in October of that year, and he now leads one of the the country’s largest political parties, the centrist National Forces Alliance.

“So, Haftar was very frustrated. He was not able to be the guy in charge after the killing of Gaddafi and the overthrow of that government. In 2014, Haftar attempted a coup that was put down. Now, it appears that he has the backing, not only of the Saudis, the United Arab Emirates, of course Egypt, which is basically a client of the Saudis and the United Arab Emirates,” Prashad said.

“Most importantly, he has the backing of the French,” the historian told Sputnik, noting that French Foreign Minister Jean-Yves Le Drian had visited Haftar several times. “And certainly, the Americans have been with him, and so, too, the Russians.”

“What’s really interesting here is, Haftar is backed by everybody, but they can’t come out and emphatically say ‘We’re with you,’ because they have to support the UN government,” Prashad told hosts Brian Becker and John Kiriakou. “It should be said, the Americans have withdrawn their troops [from] Tripoli, and I think this is precisely because they don’t want to have their troops be put in the position of defending the UN government. It’s essentially a red carpet welcome into Tripoli for Mr. Haftar.”

But like so many other things, Prashad said US policy in Libya is an “oil policy,” noting that “in this case, oil plays an enormous, outsized role.”

“It’s a very clear issue, that Europe has basically destroyed its three major suppliers of oil and natural gas for political reasons,” Prashad said. “The first was, Europe joined the Americans and the Israelis in 2006 to produce the sanctions regime against Iran. Iran was a major supplier of oil and would have been a big supplier of natural gas to Europe. Secondly, this NATO war” pushed largely by the French but also by the Americans, “took out Europe’s main oil supplier, which was Libya — that was in 2011. And then, the American-led initiative against Russia in Ukraine, the sanctions that came after the Crimea seizure, all of that put in basic jeopardy the Nord Stream pipeline, which would have brought natural gas into Germany.”

“It’s incredible: between 2006 and 2014, the three main energy suppliers were taken out of operation, as far as Europe was concerned — which is why Europe was so eager to not go with Trump’s most recent sanctions against Iran,” Prashad told Sputnik. “And if that is not going to be turned around, there’s been great expectation that the Libyan oil fields will come back fully in-line and provide oil to the Europeans. In fact, Mr. Haftar, twice last year, made a push to grab the oil installations along the Mediterranean coastline, and this time, very interestingly, while they made a dash along the Mediterranean road, going along the Mediterranean Sea towards Tripoli, his troops also dashed outward and seized the biggest oil fields in Libya, and they are now moving north from those oil fields towards Tripoli and towards Zawiyah, which is also a main oil port for the exit of oil to Europe.”

Despite the chaos since 2011, oil has still been exported from Libya, albeit at a much declined rate. Prashad said the revenue is supposed to go to the National Oil Ministry in Tripoli, but that militias that control the oil fields, which are hundreds of miles to the south in the Fezzan region of the Sahara, often sell the oil on the black market instead — although some militias, when allied with the central government, have paid their revenues into the oil ministry.

“I mean, look: If you’re a European, you don’t care if the oil is coming from a black market or directly from the Libyan government,” Prashad told Sputnik, noting that Libya’s is the “sweetest oil in the world, in other words, needing the least processing… that’s what the Europeans have had their eye on for a very long time.” That, Prashad said, is why NATO backed the uprising against Gaddafi in 2011.

“Haftar might very well succeed,” Prashad said, being careful to note that he would encounter very stiff resistance in Tripoli itself, where pro-government militias have converged to defend Sarraj. “But he has shown, as he showed in Benghazi, that he is willing to allow his troops to fight brutally, and nobody has criticized him,” the historian said, calling him the “mirror image of Abdul Fattah al-Sisi” and noting that Haftar would fashion himself as the “Sisi of Libya.”