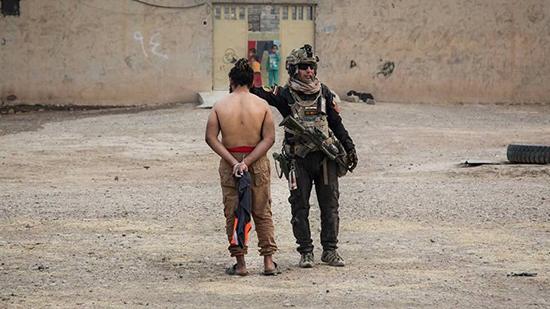 ERBIL (Kurdistan 24) – The Iraqi judiciary on Monday released the courtroom confession of a Belgian Islamic State fighter sentenced to death in which he admitted to the use of chemical weapons and chlorine gas by the jihadist group.

Bilal Abdul-Aziz al-Marshouhi, 25, known as Abu Fadhil al-Belgiki (Belgian), faces a hangman’s noose after being convicted by an Iraqi court of belonging to the Islamic State and fighting against Iraqi forces in Mosul.

“I was born in Belgium, so I have a Belgian nationality with Morocco origin. I studied engineering at the University of Antwerp in Belgium. I became Muslim after I got to know a friend there and read some books that urge extremism and extremist ideas,” Marshouhi said during the court hearing in Baghdad, as detailed on Monday in the official publication of the Supreme Judicial Council of Iraq.

“In the meantime, the Syrian revolution broke out, and I started to go back to the internet and some websites, where I was briefed on the actions of the Nasra Front and the Free Syrian Army, their fighting against the Syrian forces, the liberation of the territories and the conditions of the people living there.”

He stated that he became a hard-line radical and his mindset only worsened as a result of serious differences with his family. Marshouhi said his cousin, who he named as Izzalddin, and some friends then motivated him to join the fight in Syria.

The now-convicted Belgian national decided to join the Nusra Front armed group with his Dutch wife, also of Morocco origin. After flying from Belgium to Germany, then to Turkey, they illegally crossed the border into Syria by land to enter Aleppo with the help of acquaintances.

He was sent to a camp affiliated to the Nusra Front where he received physical training and instruction in the use of weapons along with some other foreign fighters.

Mashrouhi left the armed group and joined the Islamic State after tensions rose between him and a leader named Abu Barra al-Belgiki, “as he filed reports against me and accused me of opening pornographic sites.”

Following the emergence of the Islamic State, Mashrouhi moved with his family to areas controlled by Islamic State jihadists.

“I met with the [ISIS] governor of Aleppo, Abu Hafs al-Jazrawi, and I was later appointed as an ISIS policeman in Aleppo.”

“I was severely injured in the head, back, and right hand as a result of shelling. After my recovery, I returned to work, but ISIS moved me to Raqqa where I worked in the General Administrative Office.”

During the court hearing, the convicted Belgian national confessed that the extremist group used chemical weapons, including mortar shells containing chlorine gas, in the Raqqa countryside and at a camp.

As for his entry into Iraqi territory, Marshouhi noted that he moved to Mosul to support Islamic State fighters there during the military operations launched to liberate the city from the Islamic State’s grasp.

“We fought fierce battles with Iraqi forces in Mosul. When the army began to advance and control most of the territory, I fled towards Syrian territory, but I could not escape and was arrested inside Iraqi territory,” he added.

Marshouhi was investigated by judges at the Central Investigation Court at Baghdad’s Rusafa Court and was then referred to the Central Criminal Court, which sentenced him to death by hanging in accordance with the provisions of Article IV of Iraq’s anti-terrorism law.

Human rights groups have long criticized critical flaws in the Iraqi judicial process, including the routine use of torture to extract confessions, and the preponderance of unfair trials.

Last month, Iraq’s Supreme Judicial Council published the confessions of 14 French Islamic State fighters who were recently transferred from Syria to Iraq. As part of their confessions, they outlined how they traveled to the region and initiated themselves as jihadists.