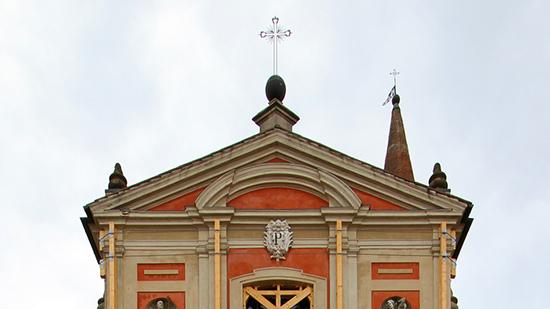 A small Italian town has taken to covering crucifixes in the local cemetery and chapel, apparently so as not to offend people of other faiths, Il Giornale reported. Political outrage has ensued.

Pieve di Cento is a town of around 7,000 people, located just north of Bologna in Northern Italy. Although Bologna and the surrounding region is home to a small but growing number of Muslims, the Catholic Church still reigns supreme, with nine out of ten residents calling themselves Catholics.

Locals were surprised, then, when someone at a cemetery in Pieve di Cento erected black sheets to hide crucifixes on the graves, Il Giornale reported on Monday. The sheets went up as part of renovations at the chapel, in case any workers of different faiths were offended. Inside the chapel itself, blackout curtains on motorized rails obscure the crosses when work is being carried out.

Right-wing and Catholic politicians were quick to denounce the move. Forza Italia (Forward Italy) deputy Galeazzo Bignami said that “If the administrators are ashamed of our tradition and our culture, they should go and hide themselves and not just behind a motorized tent.”

Fratelli d’Italia (Brothers of Italy) leader and immigration hardliner Giorgia Meloni blamed the local council for the cover-up “With the excuse of respect for others, they lack respect for our Catholic culture and our traditions,” she said. “Now the Left is beyond fanaticism. This is ideological delirium.”

Although it is unclear who exactly gave the order to cover the religious symbols, leftist politics dominates Bologna, and the city is nicknamed ‘La Rossa’ (the red one), partly because of its historical association with communism.

In recent years, the government in Italy has often faced criticism for its handling of religious and cultural disputes. Plans to build a so-called ‘supermosque’ in Bologna a decade ago were scuppered by Lega Nord (Northern League) party members, some of whom desecrated the building site by walking through its foundations holding pork in an attempt to desanctify it. The city allowed construction to begin, then allowed the pork protest to take place legally, then rescinded the building permit again after a renewed outcry from Catholic groups.

In 2016, then-Prime Minister Matteo Renzi caused a public outcry when he had a series of nude statues at the Capitoline Museum in Rome covered before Iranian President Hassan Rouhani arrived for a state visit.

Italy’s current government, a coalition of the Lega Nord and anti-establishment Movimento 5 Stelle (Five Star Movement), has taken a dim view of challenges to Italy’s Catholic heritage. League leader and Interior Minister Matteo Salvini proposed a bill in 2018 that would require a crucifix to be displayed in all public buildings, including train stations, universities, and airports.

“The removal of the religious symbols that characterize our community means challenging the principles on which our identity is based,” Salvini’s bill reads. “Respecting minorities does not mean renouncing the symbols of our history, culture and tradition.”

Several high-ranking Catholic figures, including an adviser to Pope Francis, criticized the move, and blasted Salvini for politicizing symbol of “love to the enemy and unconditional welcome.”