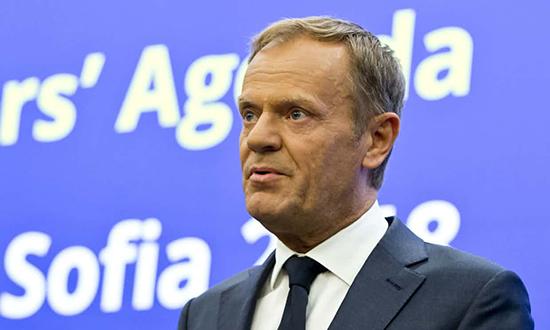 Daniel Boffey in Luxembourg, Rowena Mason in London and Angelique Chrisafis in Paris- The  Guardian

Theresa May’s request for a short Brexit delay has been torn up, putting the EU on track to instead extend Britain’s membership until 2020.

Despite the prime minister’s desperate dash to Paris and Berlin to convince leaders of her plan to break the Brexit impasse, the European council president, Donald Tusk, signalled EU politicians’ lack of faith in her cross-party talks.

Against a backdrop of growing support among the EU27 for a lengthy Brexit delay, Tusk picked apart May’s appeal for a shorter delay to 30 June in a letter to the leaders inviting them to Wednesday’s summit, where they will agree the new end date.

An EU diplomat said on Tuesday, following a late-night meeting of ambassadors, that the two end dates crystallising in EU capitals were the end of December or the end of March 2020.

A cabinet source voiced doubts over whether May could survive after presiding over such a long delay to Brexit, after previously having said she could not “as prime minister” accept a longer delay than 30 June.

The source said some in No 10 now accept it is nearly game over and described all options as very difficult for the prime minister, raising questions about whether she can keep her warring party together much longer.

May is facing a bitter backlash within her party over the likelihood of a long delay to Brexit and participation in EU elections, especially if that leads to any sort of deal with Labour involving a customs union.

Four cabinet ministers – Andrea Leadsom, Chris Grayling, Liam Fox and Geoffrey Cox – were among more than half of Conservative MPs who refused to back a June extension to article 50 in a vote on Tuesday, underlining the plummeting support for May within her own party.

In a damning indictment of Downing Street’s strategy, Tusk claimed the EU’s “experience so far, as well as the deep divisions within the House of Commons, give us little reason to believe that the ratification process can be completed by the end of June”.

Twenty-four hours before May was due in Brussels to address leaders, he warned that “granting such an extension would increase the risk of a rolling series of short extensions and emergency summits, creating new cliff-edge dates”.

“This, in turn, would almost certainly overshadow the business of the EU27 in the months ahead,” Tusk wrote. “The continued uncertainty would also be bad for our businesses and citizens. Finally, if we failed to agree on any next extension, there would be a risk of an accidental no-deal Brexit.”

Cabinet sources said pro-Brexit ministers are being severely tested by the turn of events but would probably not walk out yet if a longer extension involved the option of it being cut short, as is expected.

One source said there was a reluctance among the Brexiters to be replaced with more remainer MPs, but their patience could run out if May does agree to a deal with Labour involving a customs union.

Fox, the international trade secretary, hinted he could not put up with that outcome in a letter to the 1922 committee describing a customs union as “the worst of all worlds”.

The scale of anger among Conservative MPs about May’s talks with Jeremy Corbyn is such that ministers are now speculating about whether she would even command the support of enough her own MPs to have a chance of getting any soft Brexit deal through parliament.

The prime minister’s request for a shorter extension had garnered some support among member states. The EU’s chief negotiator, Michel Barnier, advised ministers at a meeting in Luxembourg that a longer delay would lift the pressure on MPs to vote for the Brexit deal.

But, according to a diplomatic note of the meeting seen by the Guardian, there is now growing support for the idea of a lengthy extension, sources said.

France believes a full year extension, with the option to leave sooner, as proposed by Tusk earlier this month, would be “too long”, but it has been softening its position.

Slovenia, Austria and Spain had all voiced concerns about a lengthy extension during the meeting on Tuesday, citing the risks to the EU of Britain behaving badly during the extra period of membership.

But even those capitals most wary of prolonged delay are now merely insisting on a “mechanism” to keep a check on the British government’s behaviour.

A draft summit communique, obtained by the Guardian, and to be agreed by the EU27’s leaders on Wednesday, assumes in return for an extension a “commitment by the United Kingdom to act in a constructive and responsible manner throughout this unique period in accordance with the duty of sincere cooperation”.

It goes on to say the EU “expects the United Kingdom to fulfil this treaty obligation in a manner that reflects its situation as a withdrawing member state”, while the length of the extension is left blank.

“To this effect, the United Kingdom shall facilitate the achievement of the union’s tasks and refrain from any measure which could jeopardise the attainment of the union’s objectives,” it adds in reference to the EU’s long-term plans, senior appointments and budget decisions. It adds that the UK will leave on 1 June unless it has held European elections between 23-26 May.

The threat made by the Conservative MP Jacob Rees-Mogg to disrupt the union from inside in the event of a long extension to Britain’s membership was raised in the meeting of ministers, according to a leaked cable.

Barnier told the group: “We will not tolerate this”.

France’s Europe minister, Amélie de Montchalin, told her colleagues during the meeting: “[The UK] mustn’t stand in the way of any decisions that the EU would have taken without them”.

An option, not included in the draft communique, that has been discussed in recent days is a requirement on the prime minister to set out in writing her intention for the UK to act in “sincere cooperation” with the bloc, and for a “weighing point” to be set up in October when Brussels would judge whether the UK was living up to its commitments.

According to the leaked note, a number of member states told Barnier that they did not believe Labour and the Conservatives were genuinely seeking a compromise position.

Luxembourg questioned why Labour had voted down the withdrawal agreement to which it is not opposed and concluded that its main focus was forcing an election.

Speaking to reporters, Barnier had hinted at the points he had made to the EU’s ministers during a 50-minute address on Tuesday morning, by noting that a key factor in the bloc’s thinking would be the “pressure you might want to assert” on MPs.

But even France showed signs of accepting the need for a longer extension, as May met Macron in Paris following her earlier meeting with the German chancellor, Angela Merkel, in Berlin.

“We cannot keep holding repeat Brexit summits,” an Élysée source conceded. “The EU has other things to do. Only a few weeks before the European elections, the EU must show that it knows how to do other things than holding summits about Brexit.” 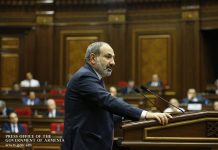