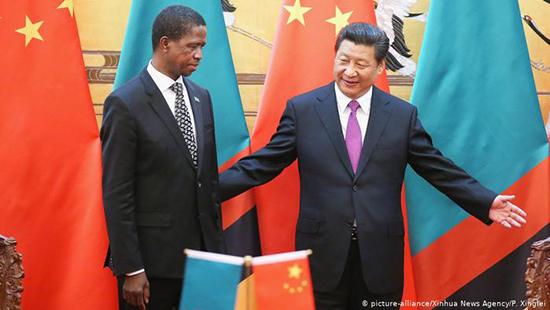 Many Africans are worried by the increasing presence of China on the continent. But how much is China really involved? A DW team traveled to Zambia to investigate how China has taken control of key infrastructure.

Mandarin can be heard in every corner of Lusaka’s Kenneth Kaunda airport, as it’s spoken by nearly half of the passengers passing through the building. Outside the complex, a massive billboard promoting the Chinese construction conglomerate Jiangxi International welcomes visitors. The road from the airport to the capital’s city center is lined with billboards bearing names of Chinese firms.

This illustrates Zambia’s choice of China as its preferred business partner, amid growing uneasiness about the African continent’s rising debt to the Asian economic powerhouse.

With Chinese investments in the landlocked southern African country having grown tenfold in the last decade, it is easy to deduce that China has a tight grip on the Zambian economy.

The details of these numerous deals between Beijing and Lusaka, however, are not so easy to come by. The projects were neither made public nor were they properly vetted by relevant institutions, including parliament. Here are some examples from recent years.

The process of moving from analogue to digital broadcasting repeatedly made headlines as facts about the deal gradually came to light.

“The government told us after the migration, ZNBC would be in charge of content and TopStar in charge of air transmission, including the equipment,” a senior ZNBC employee, who was involved in the transformation and wanted to remain anonymous, told DW.

Zambia’s competition laws forbid any single media entity to hold the two types of licenses concurrently. “It was shocking that TopStar was not only in charge of air transmission, but was also in the market as [a major content provider],” said the ZNBC employee.

As agreed in the deal, StarTimes was given 60 percent of the nation’s media stake, while the state broadcaster received 40 percent.

Another loan from the Exim Bank of China, this time for $365 million, was issued for the construction of the new curved glass wing of Kenneth Kaunda International Airport.

“In addition to the airport construction, a second loan was provided to modernize the Zambian Air Force (ZAF),” said an airport staffer, who spoke to DW on condition of anonymity.

Officially, the Chinese are there to provide training and capacity building to Zambia’s air force, which controls the nation’s air traffic. According to the anonymous source, the Chinese have set up a parallel structure at the airport, but he does not believe they have absolute control of the nation’s airspace, contrary to rumors on social media platforms.

How big is Zambia’s debt really?

China’s presence in Zambia dates back to 1976 when Beijing completed its first major project on the African continent, the Tanzania-Zambia railway, TAZARA. Zambia prides itself on being the Asian giant’s oldest friend in Africa.

But this friendship is now being transformed into a creditor-debtor relationship, with trade between the two countries greatly in favor of China’s exports to Zambia.

According to the Zambian government, the country owes China up to 30 percent of its $9.4 billion foreign debt.

The true figure could be even higher. The records “do not include parastatal loans and government guarantees,” says former Information and Broadcast Minister Chishimba Kambwili.

“If we count all the project money and guarantees, Zambia should owe China in excess of $23 billion,” he told DW.

Kambwili himself was one of President Edgar Lungu’s closest allies and served in two ministerial posts under him. He had strongly supported the president’s friendly ties with Beijing until he was fired for harboring intentions of replacing the president as head of the ruling Patriotic Front party.

The businessman-cum-politician from the mineral rich Copperbelt region is now facing trial for graft, on charges that he says are politically motivated. He has co-founded a new party to contend the presidency.

Despite the political involvement and corruption allegations, Kambwili is still seen as an important figure with inside information concerning the deals.

After Kambwili split with Lungu, he became an openly fierce critic of the president’s Beijing policy. “To me, the Chinese are not investors but infestors. When they give you 10, they are getting 50. And obviously, if you look at the terms of their loans, you’d be extremely surprised,” he said.

In total, according to official government statistics, Zambia is envisaged to spend about $20 billion between 2011 to 2021 on its infrastructure. 83 percent of these projects will be funded and implemented by Beijing-affiliated companies.

A further factor fueling the fear of Chinese taking over the country is the sheer number of Chinese entering Zambia and establishing permanent businesses. Data from Zambia’s National Council for Construction that were analysed by DW revealed that nearly 90 percent of registered foreign contractors in Zambia are Chinese.

“I think they are addressing their population problem,” said local labor consultant John Musonda, who believes that China is actively redistributing its population in Zambia.

“The reality is they [the Chinese] are not leaving. If they work on the road, the next thing they say is: “Can I work on the drainage?” The next thing is: “Can we build your school? Can we build your clinic?” Before you know it, they are into trading, they are buying land and settling on farms,” Musonda told DW. Critics claim that thousands of hectares of land in Zambia  have been given to the Chinese.

Though the most recent official statistics put the number of Chinese living in the country at only 20,000, many Zambians feel overwhelmed by the Chinese presence. Some Chinese are venturing into small-scale trading, thereby clashing with the locals.

“The Chinese have taken away the businesses that the local people are doing,” former Information Minister Kambwili said. “Even the rearing of chickens and roasting of maize is being done by Chinese.”

“I wouldn’t be surprised if, in the next three or four years, we would have Chinese ministers,” he said.