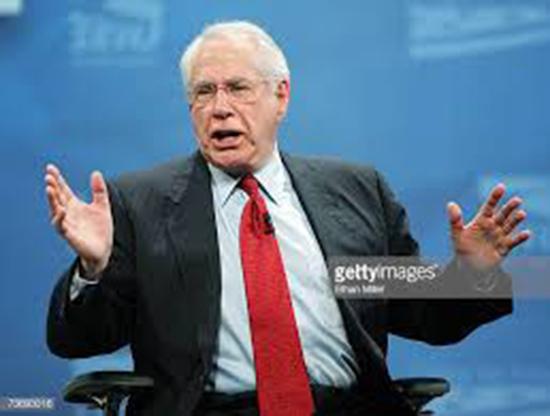 The former U.S. senator, 89, who read the Pentagon Papers into the Congressional record, and ran for president in 2008, says he’s not entering to win but to inject crucial issues into Democratic primary debates.

Former U.S. Senator Mike Gravel formally declared his bid on Monday for the Democratic Party’s 2020 nomination for president in an effort to introduce into the primary debates critical discussion of U.S. interventionism abroad and a system for direct democracy at home.

Gravel, who is 89 years old, says he’s not in it to win but to spur debate on what he sees as the two most vital issues facing the United States:  ending militarism and expanding democracy beyond representative government.

Serving as a U.S. senator from Alaska between 1969 and 1981, Gravel became best known for having read the highly-classified Pentagon Papers into the Congressional Record at a Senate subcommittee meeting that he chaired on June 29, 1971. Several other senators had turned down copies of it from whistleblower Daniel Ellsberg.

Gravel had immunity to reveal classified information in the midst of a legislative act as laid out in Article 1, Section 6 of the U.S. Constitution, the so-called speech or debate clause. It is rarely invoked by members of Congress to make public secret evidence of governmental criminality or abuse.  The Pentagon Papers, a secret Defense Department study of the Vietnam War, made clear that U.S. administrations had kept the war going while lying to the American people about the chances of victory in Southeast Asia.

The U.S. Supreme Court ruled the next day, on June 30, 1971, that the Nixon Justice Department had violated the First Amendment of the Constitution by exercising “prior restraint,” that is, ordering a news organization in advance not to publish.  The court’s decision was a victory for The New York Times and The Washington Post and for press freedom.  But while the court said the government could not tell a newspaper not to publish classified information, the majority also ruled that after publication the state could prosecute a media outlet for having done so.

Gravel begins reading the Papers at the 7 minute mark:

While Gravel only faced possible censure or expulsion from the Senate (neither happened), he became liable for prosecution when he later had the Papers published in four volumes by Beacon Press in Boston. The FBI investigated the publisher.

While Nixon chose not to go after Gravel, a grand jury was empaneled in Boston to indict two New York Times reporters who had worked on the Papers’ story. The case collapsed before reaching an indictment when Ellsberg’s trial for stealing the documents ended in a mistrial in part because of warrantless wiretapping against him. The Times reporters asked the prosecutors whether they had also been spied on and received no reply, Ellsberg said in a recent interview.

The attempt by Nixon to prosecute two journalists for possessing and disseminating classified information has gained new relevance with the case of Julian Assange, the WikiLeaks founder and publisher.

Assange is facing prosecution in the U.S. on what is believed to be similar charges of possession and dissemination under the Espionage Act. He is also being spied on in Ecuador’s London embassy, where he has had asylum since 2102.

Gravel reemerged from a long absence in politics to challenge for the 2008 Democratic presidential nomination.  He entered several debates and shared the stage with Barack Obama, Hillary Clinton, and Joe Biden among other candidates and mixed it up with them:

It is in the debates that Gravel hopes again to shine a light on what he believes are the most important issues of the day.

But the Democratic Party has this year changed the rules for gaining entry to the 12 scheduled debates, the first of which will be on June 26 in Miami. Candidates must garner donations from at least 65,000 individuals. And there must be contributions from a minimum of 200 different donors in at least 20 states.

Gravel has a steep obstacle to overcome in less than three months. He is not alone. Rep. Tulsi Gabbard of Hawaii has not yet reached the 65,000 donor threshold.

Gravel said that despite his run he’s supporting Gabbard. “She’s the only one prepared to take on the military industrial complex,” Gravel said in a telephone interview. “She wants to close bases around the world and that’s music to my ears.”

The idea for a Gravel run in 2020 was hatched by two first-year university students, David Oks and Henry Williams. Gravel gave them control of his Twitter feed after he saw how well they understood his thinking. “That’s what really sold me [on running],” Gravel said.

Gravel’s website lays out his platform with this introduction:

He also called for Assange to be given amnesty, the National Security Agency to be abolished, the U.S. to withdraw from the “Five Eyes” intelligence network, police to be held account for brutalizing citizens, a formal investigation into U.S. government involvement in human rights abuses around the world, and an end to foreign wars.

“There are two things that are destroying us,” Gravel said. “One, on the long arc of history, will be climate change—will this planet survive—and two, is the nuclear threat, which is stronger than ever and could eclipse us overnight.”

Gravel’s core issue, which he’s been working on for 25 years, is to establish the procedures to create a Legislature of the People in which citizens can use the initiative system, now present in 26 U.S. states, to make federal laws. Power resides with the people who give it away in elections to representatives who then use it for their own interests, Gravel said.

“The people will become the senior partners and representative government will shape up,” said Gravel.

He announced with this video on Monday:

Joe Lauria is editor-in-chief of Consortium News and a former correspondent for The Wall Street Journal, Boston Globe, Sunday Times of London and numerous other newspapers. He is the co-author with Mike Gravel of “A Political Odyssey,” published by Seven Stories Press.  Joe can be reached at [email protected] and followed on Twitter @unjoe .

Mike Gravel is a member of Consortium News’ advisory board.