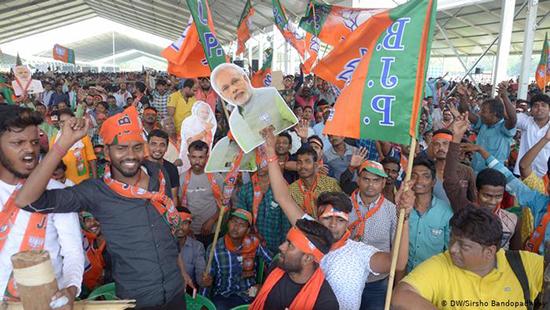 Opposition parties are trying to stop Narendra Modi from winning a second term as prime minister. But opinion polls suggest the Hindu nationalist leader could narrowly win the vote, which is set to kick off on April 11.

This year, around 900 million people are eligible to vote for the 543-strong Lok Sabha, India’s lower house of parliament. The polls, which begin on April 11 and end on May 19, will be held in seven phases to ensure free and fair elections. Many Indian states will complete voting in one day, whereas others with larger populations will take multiple days for ballot casting. Votes will be counted on May 23.

More than 84 million people, including 15 million aged 18 or 19, are going to vote for the first time. Around 430 million women are expected to vote and could exceed the number of male voters for the first time in a general election in India, the world’s largest democracy.

This year’s polls could be the most expensive ever in India. According to the Centre for Media Studies, the 2019 vote will cost the election commission around $7 billion (€6.21 billion), up from $5 billion in 2014. In comparison, $6.5 billion were spent in the 2016 United States presidential and Congressional elections. Experts say that political parties in India will spend some of this amount on social mediacampaigns.

Rakesh Sinha, a lawmaker in Modi’s Bharatiya Janata Party (BJP), has praised the prime minister for these achievements: “If one evaluates all our development programs, it looks like a socialist government. Our government has made many facilities available to the poor; facilities that previously only the middle class could afford.”

In its election manifesto, the BJP focuses on farmers’ welfare, national security, the Citizenship Amendment Bill, healthcare and the economy. The party is also using the conflict with Pakistan in February to attract more voters. Modi, meanwhile, has succeeded in maintaining a clean image despite repeated allegations of corruption by the opposition.

India’s main opposition party, the Congress, accuses Modi of corruption in a Rafale deal with France’s Dassault Aviation. “He (Modi) has an incorruptible image. His ‘brand Modi’ has not be shaken by the controversies over Rafale for the simple reason that people, his supporters, don’t believe in them,” Yashwant Deshmukh, a psephologist and founder of the CVoter voter research survey firm, told DW.

At the same time, India’s economic growth has been less than spectacular five years on. The South Asian country’s unemployment rate is at its highest level in more than 45 years. Agricultural growth has plummeted in the past few years, prompting many farmers to commit suicide. Foreign direct investment has also taken a nosedive.

Moreover, the BJP under Modi’s premiership was seen as supporting fringe right-wing organizations, many of which were responsible for lynching individuals allegedly consuming beef. But BJP lawmaker Rakesh Sinha downplayed the lynching incidents: “No one can say that the government did not taken any action after mob lynching cases,” he told DW. “It is unfortunate that people link these issues to a certain ideology or the government.”

The Indian National Congress (INC), which the BJP defeated in the 2014 polls, has emerged as the most powerful challenger to Modi. In its election manifesto, the INC has promised a guaranteed income to India’s poorest 20 percent, good healthcare, the right to affordable housing and a reduction in unemployment over the next five years. Rahul Gandhi, the young INC leader, also seems to have reinvented himself of late and has played a significant role in steering his party to victories in a number of state elections. Now, his sister, Priyanka Gandhi, has joined the political fray in an attempt to boost the party’s popularity.

The Congress party has also called for a national coalition of regional parties, known as the “Mahagathbandhan,” to defeat the BJP in the upcoming polls. However, past strife and disagreement with regional political players have weakened the alliance even before the elections.

For instance, the Congress party has traditionally had problems with former chief ministers Mayawati and Akhilesh Yadav in the northern Uttar Pradesh state, which sends the highest number of representatives to parliament. This time around, Gandhi has asked both leaders and their parties to join the anti-BJP coalition. The Congress has never really got along with the leftist governments in the southern Kerala state, whereas in Maharashtra, it has political differences with the regional Nationalist Congress Party (NCP). In most states, the Congress is likely to have its coalition partners as direct competitors, which can create a conflict of interest at the national level.

The BJP, however, has managed to forge alliances with parties across the country, which means that in case the party does not secure an absolute majority like it did in 2014, it may still be able to form the next government.

Psephologist Deshmukh says much depends on how the opposition organizes itself in the coming weeks. “The onus is more on the opposition parties; on how they put up their campaign and if they can manage to put aside their differences to forge an alliance.”