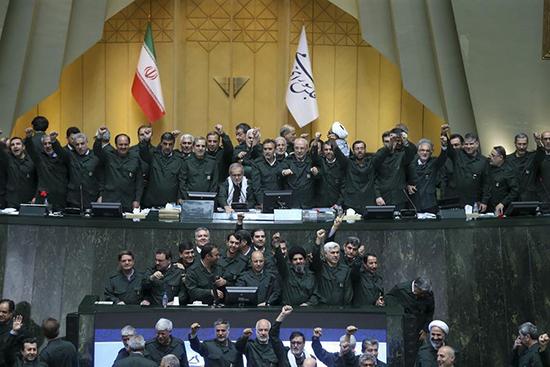 Iranian lawmakers dressed in paramilitary uniforms chanted “Death to America” as they convened on April 9 for an open session of parliament after the White House designated Iran‘s Revolutionary Guard a foreign terrorist organization.

President Hassan Rouhani declared that the force’s popularity would only surge in the wake of the designation, saying guard members would be dearer “than any other time in the hearts of Iranian nation.”

The move by Washington on April 8 was an unprecedented declaration against a foreign government entity- one that could prompt retaliation and make it harder for Americans to work with allies in the region who have contact with members and affiliates of the Iranian Revolutionary Guard Corps, or IRGC.

It marks the first time the United States has designated an entire entity of another government as a terrorist organization, placing a powerful and expansive armed force with vast economic resources that answers only to Iran‘s supreme leader in the same category as al-Qaida and ISIL.

Within hours of the Trump administration’s declaration, Iran‘s Supreme National Security Council responded by designating the U.S. Central Command, also known as CENTCOM, and all its forces as terrorist, and labeling the U.S. a “supporter of terrorism.”

In Tehran on April 9, many of the lawmakers wore the uniform of the guard in a show of support as they convened for a parliament session marking the National Day of the Revolutionary Guard, which follows the lunar calendar. This year it coincides with the April 9 holiday known as Nuclear Day.

Marking Nuclear Day, Rouhani unveiled dozens of “achievements” in nuclear technology, something he does every year. This time he touted the beginning of an installation of a chain of advanced centrifuges at the uranium enrichment facility in the central town of Natanz as well as an addition at the Fordo underground facility.