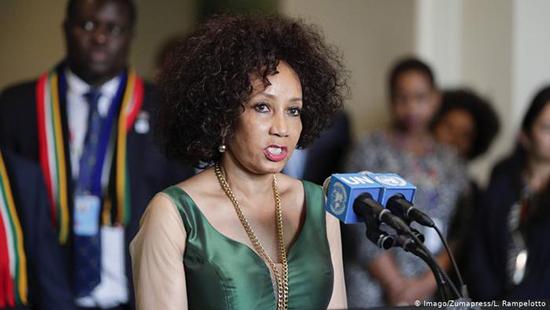 South Africa has announced that it will not replace its ambassador to Israel. Experts are uncertain about what kind of lasting impact the decision will have for South African-Israeli relations.

The first stage of a “downgrade” — that’s what South Africa’s Department of International Relations and Cooperation has called its latest decision regarding its embassy in Tel Aviv. In May 2018, South Africa recalled its ambassador to Israel following clashes between Israeli military forces and protesters during which at least 52 Palestinians were killed. In a recent speech, South African Foreign Minister Lindiwe Sisulu (pictured above) clarified that a decision had now been made to not replace the ambassador.

The embassy, which would be downgraded to a liaison office, “will have no political mandate, no trade mandate and no development cooperation mandate. It will not be responsible for trade and commercial activities,” Sisulu stated. However, consular services, such as visa issuing, would remain in place.

The move comes ahead of Israel’s elections on April 9, and, though South Africa’s position on the country may not bear the same weight as that of the United States, it can be seen in strong contrast to Washington’s policy. The US recently moved its embassy from Tel Aviv to Jerusalem and controversially recognized the Golan Heights as part of Israel — both actions are seen by many to work in favor of Prime Minister Benjamin Netanyahu’s government.

To observers of South African politics, the move comes as no surprise. In 2017, members of the ruling African National Congress (ANC) adopted a resolution calling for the downgrade of the embassy in Israel in order to draw attention to Israel’s settlement policy .

“South Africa has some kind of historical solidarity with the people of Palestine,” explains South African political analyst Ralph Mathekga. “Most of the political parties including the trade unions have historical sympathy towards Palestine. And you often hear the comparison between apartheid and what is going on in Israel.”

Not only were South Africa’s anti-apartheid groups allied with the Palestinian Liberation Organization (PLO), the Israeli government was viewed by many as a backer of the apartheid regime.

After apartheid, says Na’eem Jeenah of the Johannesburg-based Afro Middle East Center research institute, South Africa attempted to play a mediator role between Palestinians and Israelis: “They had a number of delegations from both sides coming to South Africa for talks and delegations from the military, political [sphere] etc.” According to Jeenah, South Africa had simply had enough. “The feeling now is that Israel has taken South Africa’s efforts for granted, that Israel has in fact exploited those efforts in order to fulfill its own agenda — strengthen trade links, etc. — while not [being] willing to accept any [mediation] role by South Africa.”

Mathekga believes the move is more timely, perhaps even short-lived. South African elections are coming up on May 8, and, as he puts it, “political parties usually yield to popular ideas during this time … I wonder if there will be a re-opening of talks after the elections. My view is that South Africa cannot ignore the state of Israel.”

Whether the downgrading of the embassy will actually have a strong impact is another matter that analysts are uncertain about. Trade ties still exist and for now South Africa’s foreign office has not announce it’s next move.

“Eighty percent of South Africans are Christians and many of them go to Israel on pilgrimage every year,” he adds. “And so there’s actually a variety of communities that have been quite upset by the statement of the minister.”

In general, says Shulman, the South African policies towards Israel don’t have a major impact on the Jewish community — yet the concern that this latest decision could be used a political tool still exists. “We have a very strong community. So from that perspective it’s fine,” Shulman went on. “But what happens when you have these very harsh statements being made? It raises the temperature and it can create the context where people who have anti-Israel attitudes can then use that to use to go after the local community.”

South Africa’s Jewish Board of Deputies, an umbrella organization of Jewish groups in the country, on Monday spoke out against the downgrading of the embassy, saying that: “A downgrade would further be inconsistent with how South Africa has always conducted its foreign policy, which has been to engage with all sides and never to resort to the politics of boycott.”

The statement further noted that Foreign Minister Sisulu would still need the backing of Parliament and the Cabinet in order to make this policy official.