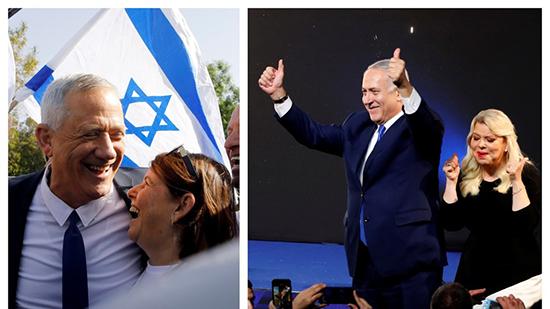 The policy differences between Israeli PM candidates have proven largely a sideshow in an electoral contest that has become a referendum on the leadership of incumbent Benjamin Netanyahu, analysts say.

“The biggest issue is Netanyahu himself: whether Israelis are tired of Netanyahu, whether they’re put off by the stench of corruption that surrounds him, whether they want a change, or whether they prefer to stick with a safe pair of hands and a statesman that obviously enjoys good relations with many world leaders,” Northeastern University professor Dov Waxman says. “There’s actually been very little debate – a striking lack of debate – over Israeli policies.”

Like Netanyahu, Blue & White party challenger Benny Gantz is a right-of-center candidate, “tough on military issues,” with US connections. However, political analyst Mitchell Barak believes a Gantz win “will refresh some things in the region, possibly with the Palestinians… There’ll be a new person for them to speak to. Whenever there’s a regime change, or a change in leadership, that could be an opportunity. That could be a chance to restart things, to start negotiations, and to really get help.”

Netanyahu and Gantz may not differ appreciably on foreign policy or their attitude toward Israel’s defense, but “Netanyahu 2.0,” as Waxman calls Netanyahu’s return to the PM role in 2009, “has really waged war in some respects against the rule of law in Israel.”

“He has blamed his pending indictments on a corrupt police force, has accused the legal establishment of being biased against him, and along with his allies in government he has really undermined in many ways some of the bastions of liberal democracy in Israel,” Waxman says, contrasting the Likud incumbent with former IDF commander Gantz, who has “emphasized the importance of the rule of law in Israel, of Israel remaining a liberal democracy, and of being respectful toward Israel’s democratic institutions.”

“It’s much more likely that Benny Gantz is going to be a member of Netanyahu’s government – probably defense minister – than the other way around… I’d be very surprised if Benny Gantz doesn’t sit in [Netanyahu’s] government as defense minister,” human rights activist Miko Peled predicts, acknowledging the incumbent is “the better horse trader than anyone – which is why he gets to be prime minister.”

While both candidates have declared victory, Likud and Blue & White are projected to win 35 parliamentary seats each with 95 percent of votes counted, leaving the candidates in a virtual deadlock.