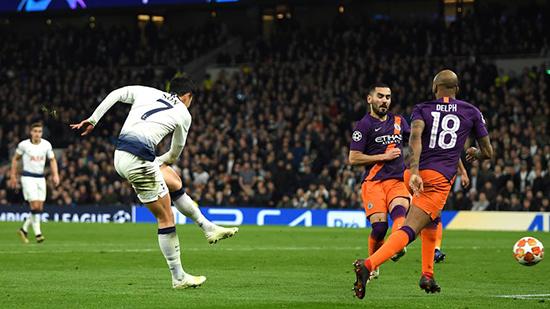 Son Heung-min continued his blossoming love affair with Tottenham’s new stadium as he helped his side overcome the loss of Harry Kane by beating Manchester City 1-0 in the Champions League quarter-final first leg.

Son scored the first goal in the Tottenham Hotspur Stadium on its opening night last week and again was the hero for Spurs as he gave them a slender but deserved advantage ahead of next week’s second leg.

Mauricio Pochettino’s men, playing in the Champions League last eight for just the second time, were better than City for the majority of the game but looked like drawing a blank after the loss of Kane to another ankle injury early in the second half.

However, Son – so often the man to step up in Kane’s absence – fired through Ederson in the 78th minute to make it two wins from two in the north London club’s new home.

Pep Guardiola’s quadruple-chasing side will now have to do things the hard way if they are to keep that dream alive and they will regret Sergio Aguero’s early penalty miss, which came after an intervention from VAR.

This was anything but just another stadium as Kevin De Bruyne suggested before the game, with the noise inside the new arena in the opening few minutes deafening as Spurs finally got the taste of Champions League action in their new home.

But City, unlike last year at Anfield, were not shaken, settling quickly, and they got the chance to lead in the 13th minute.

Raheem Sterling cut inside and drifted across the face of the penalty area before getting a shot away which hit Danny Rose.

Dutch referee Bjorn Kuipers wanted to check what part of Rose’s body the ball struck and after checking replays, the official pointed to the spot.

Hugo Lloris came to Tottenham’s rescue, though, as Aguero, making his return from injury, produced a tame effort which the France goalkeeper kept out easily with a save to his left.

Lloris had made a number of glaring and costly errors this season, but this was a big moment for the skipper, who also saved a penalty in the north London derby last month.

That gave Spurs the chance to gain some momentum and they began to settle into the game.

Kane was presented with a great chance to put his side in front in the 23rd minute after Kuipers played advantage when Dele Alli was fouled – but the England striker hit his shot too close to Ederson and the City goalkeeper got down well to palm it away.

The rest of the half belonged to Spurs as they pushed City back and caused them problems with with high-intensity pressing.

The hosts longed for a moment of quality in the final third, but it just did not come and City were able to get to the break without conceding.

Spurs were again on the front foot early in the second half as Son curled an effort just wide and then tested Ederson.

But Tottenham’s hopes were hit just before the hour with a sight that has become all-too familiar in recent times – Kane going off with an ankle injury.

Just six weeks after coming back from a similar problem, he twisted his ankle in a challenge with Fabian Delph and immediately went down the tunnel, unable to put any weight on it and meaning he is potentially unlikely to reappear again this season.

It is his third such injury in 13 months and now Spurs will be waiting to find out whether he will be back in time to help not only Champions League progression this season, but also qualification for next year.

That injury threatened to suck the life out of what was a pulsating game until Son stepped up with 12 minutes remaining.

Christian Eriksen played the South Korean in on the edge of the area, he regained possession after losing control, cut inside and fired through Ederson.

VAR needed to check that Son kept the ball in when he retrieved it, which he did, and he was able to celebrate another massive goal in this new stadium.

Spurs saw it out relatively trouble-free to give them something to defend at Eithad Stadium next week.