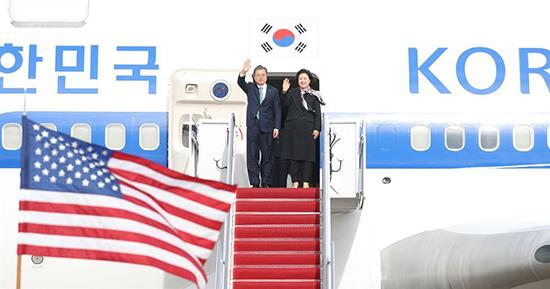 South Korean President Moon Jae-in arrived in the United States on Wednesday for talks with U.S. President Donald Trump that will focus on ways to bring North Korea back to the dialogue table.

Talks between Washington and Pyongyang have since stalled as the second U.S.-North Korea summit ended abruptly and without a deal.

The U.S. president has asked his South Korean counterpart to help facilitate his future dialogue with Kim. Moon has so far held three bilateral meetings with the North Korean leader and is now pushing for a fourth one.

The Moon-Trump summit will be held Thursday following talks between the South Korean president and key U.S. players in the denuclearization talks with North Korea that include Secretary of State Mike Pompeo and National Security Adviser John Bolton, according to an official from Seoul’s presidential office Cheong Wa Dae.

Moon is also scheduled to meet Vice President Mike Pence before his summit with Trump.

“The upcoming (South Korea-U.S.) summit comes on a joint view that consultation between the two countries is important to quickly revive the momentum for dialogue following the Hanoi summit,” Kim Hyun-chong, a deputy director of the National Security Office (NSO) at Cheong Wa Dae, said earlier.

Even after his Hanoi summit with Kim fell through, Trump was seen to be restraining his administration somewhat from provoking the North, saying no additional sanctions are necessary.

Moon is widely expected to encourage the U.S. leader to continue personally engaging with the North under the so-called “top-down” approach to denuclearization.

“President Moon’s U.S. visit this time is expected to be a chance to seek specific ways to completely denuclearize the Korean Peninsula and establish permanent peace while maintaining the top-down approach,” the NSO official said.

Moon and Trump will first hold a one-on-one meeting, their seventh since Moon took office in May 2017.

They will later be joined by their top officials and aides in a small group meeting, which will be followed by an expanded summit over lunch at the White House.