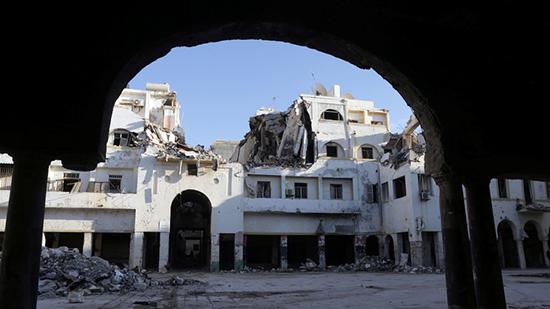 Russia  Today- Mikhail Khodarenok, military commentator for RT.com. He is a retired colonel. He served as an officer at the main operational directorate of the General Staff of the Russian Armed Forces.

Military interference or attempts at peacekeeping in Libya will only result in a pause in the conflict, not a resolution. The current situation in Libya is in flux, and reports we get are slow in arriving and largely unreliable.

So far, we can come to very few conclusions about what’s going on, and very preliminary ones at that. It seems that at this point the military struggle in Libya isn’t ruled by a strategy of fighting until victorious and without retreat. This is based on relatively small losses of personnel and military hardware. It would appear that, for now, parties to the conflict are busy not so much with continuously conducting offensive or defensive military operations, but rather with demonstrating their capabilities and intentions.

There is no accurate data on Khalifa Haftar’s Libyan National Army (LNA) in terms of troops or military capabilities. They are armed mainly with the leftovers from Muammar Gaddafi’s army, though lately some weapons have allegedly been coming through Egypt. There is no doubt that LNA has been getting weapons through any channel available.

At the same time, there is no accurate information on the troops commanded by the Government of National Accord (GNA) operating from Libya’s capital Tripoli. Led by Fayez al-Sarraj, the government that was formed with the support of the UN and EU.

That’s why, at this point, it’s impossible to analyze the capabilities of parties to the conflict in any fact-based way. We don’t know the most important thing either – not how much military hardware Haftar or al-Sarraj might have, but whether it’s functional and whether the two sides have enough resources for a prolonged military conflict, such as munitions and food supplies.

There is no credible information regarding the morale of either the LNA or the GNA troops, whilst, at the end of the day, this will be a defining factor as to who wins in the military conflict.

Let’s have a brief overview of all possible scenarios for Libya. First, it is possible that the US and some NATO countries may intervene in the conflict. They would only need a couple of days for operational deployment on the ground, while airstrikes and missile attacks can be carried out in almost immediately.

NATO would need only several days to disperse that semi-guerilla army of Field Marshal Haftar across the desserts of Libya. In fact, that would not require any overly-advanced weaponry. In such a scenario, joint NATO air forces would most likely deploy ordinary unguided bombs. Air and sea-based cruise missiles alongside other precision-guided munition would likely be used only to wipe out Haftar’s field command centers, because there are really no other targets worthy of deploying high-precision weapons.

As for the pretext for US and NATO’s hypothetical intervention in Libya, they could start it under the guise of something seemingly plausible, such as to “restore constitutional order and neutralize the threat of illegal armed groups.” That would perfectly justify subsequent strikes and bombing since the GNA at its helm was formed with the support of the UN and EU.

This is not an unlikely scenario, especially if the LNA’s offensive turns out to be successful and pose a real threat to the West’s geopolitical interests in the region. However, it should be noted that if things go down that road other outcomes are possible too – and they may be far worse than this one. It can actually turn so bad that an exodus of people from North Africa to Europe would be small beer. And that is the only reason why the West has so far refrained from the use of force in Libya.

The prevailing opinion now is that the conflicting parties in Libya should stop any escalation of hostilities, and it would only be possible to stabilize the situation through a political solution rather than warfare. It’s been stated that the there is no military solution to the Libya conflict, and that political negotiations are the only way to unite the country and ensure its security, stability, and prosperity for all its residents.

It sounds nice, however it’s is quite unlikely to happen in the context of the Middle East and Libya. This approach hasn’t worked so far in any country of this region, nor did it produce any positive result, despite of all efforts. First of all, usually the contradictions between conflicting parties are way too big. Second, it can only lead to a freeze in the conflict at best, and sooner or later, war would break out again.

So, the most realistic way to resolving the Libya situation is the victory of the strongest, as cynical as it may sound at first glance. A winner in this armed conflict would be able to unite the country, crush the rival military groups (by making them lay down their arms and give up further hostilities), stabilize the situation, and restore basic order.

After a while, it would be quite possible to have elections and other various democratic procedures. Yet, talking about these things now, in a country which is in turmoil and engaged in civil war, would essentially mean being out of sync with reality.

So, the truth is that it only makes real sense to hold negotiations with the leader who emerges victorious in this armed conflict. Anything else is nothing more than political games, fanning the conflict’s flames to make it last longer.

The experience tells us that in recent decades, that’s exactly how it has always played out in the Middle East and Northern Africa – the order in a conflict-ridden country was always restored by the victorious party, and never because it was “the right thing to do” according to any democratic procedures.

Did you know the bogus idea of ‘social distancing’ was invented by a 14-year-old girl during the Bush administration in 2006?