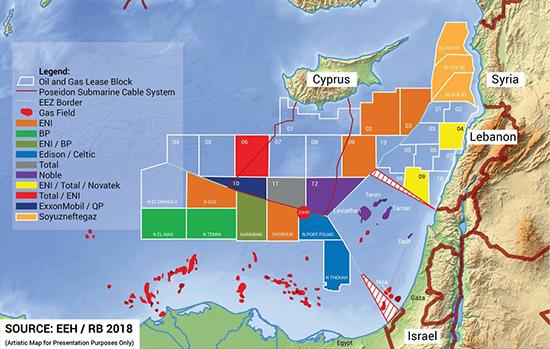 Lebanon has 95.9 trillion cubic feet of gas and 865 million barrels of oil in just 45 percent of its economic waters; enough to ignite the closed Mediterranean region.

To the south, its neighbour Israel claims ownership of 860km of the exclusive economic zone of Lebanon, to the north Syria is drowning in war, then there is Cyprus, which is lost between its Turkish and Greek affiliations.

The most comprehensive multilateral convention in the history of general international law is the United Nations Convention on the Law of the Sea (UNCLOS). It was adopted as the exclusive economic zone extending 200 miles – about 370km of the shoreline – to which Lebanon had acceded under Law 295 on February 22 1994. The matter is complicated by the fact that Israel has not signed this agreement.

While Lebanon signed its first oil and gas exploration and exploration agreements in February 2018, this small country strives to solve the problems it faces in demarcating its maritime border which will have a direct impact on the extraction process if a solution is found quickly.

Recently, Mike Pompeo, US Secretary of State visited Beirut and was greeted by warnings from the Hezbollah Secretary-General Hassan Nasrallah who had an update to his ‘army, people, resistance equation’ to urge proportional representation in parliament, adding oil to highlight its importance among Hezbollah priorities.

To the north, there is silence despite the fact that the Syrians have demarcated their maritime borders individually with a large overlap at point seven, between the maritime borders of the two countries. The war left no room for talk.

Then, between Turkish Cypriots and Greek Cypriots on the one hand and the Cyprus-Israel agreement on the other, the letter sent by the Lebanese foreign minister on June 20 2011 to the secretary-general of the United Nations stated: “The point is not the southern end of the middle line between the Lebanese Republic and the Republic of Cyprus”. It is only a midline between Lebanon and Cyprus.

The Lebanese government brokered a maritime agreement with Cyprus, but the parliament did not ratify it; whereas the Cypriots did. On the other hand, the Israelis seized on the opportunity by signing an agreement with Cyprus on December 17 2010 to adopt point one as the basis for identification without taking into account the Lebanese position adopted at point 23; which disregarded the Lebanese-Cypriot agreement of 2007.

Lebanon, therefore, faces three fronts, with each one different in nature. The State of Lebanon objects to this agreement as it touches points north of the southern maritime boundary line of the exclusive economic zone point 23. The country wants the secretary-general of the United Nations to take all the measures he deems appropriate to avoid any conflict and to maintain international peace and security.

The situation with Syria is silent, postponed for a while. The Cypriot problem between Turkey, on behalf of the Turkish Cypriot State, and Greek Cyprus means negotiations are problematic and Lebanon has no interest in intervening. Lebanon and Greek Cyprus need to conduct informal negotiations with the Turkish side taking into consideration its interests. However, it is Israel that still remains the main issue in this complicated international negotiation over oil and gas rights.

As usual, Tel Aviv did not sign the United Nations Convention on the Law of the Sea and therefore it is not confined to the rules of international legislation in this area. However, the rules of the law of the sea have become customary and binding.

With increasing Israeli threats on block nine, in conjunction with the construction of the wall on the Lebanese-Palestinian land border, we cannot but reject the Israeli declarations and allegations regarding the oil wealth in Lebanese-controlled waters through various legal, political and diplomatic means available.

The line is a confirmation of the need to limit the conflict in the diplomatic sphere, away from any escalation of security or military, but the exclusion of a security solution should not mean the waiving of Lebanon’s rights, which enjoy international legitimacy.

At the judicial level, Lebanon has the right to appeal to the International Court of Justice in The Hague, to the Court of the Law of the Sea, or even to any universal arbitral tribunal. The first course faces a major obstacle in the recognition of the State of Israel. Also, Lebanon has never made such a statement because it fears that the jurisdiction of the court will then be formed over all disputes between it and other states that recognise the court.

Litigation before the Court of the Law of the Sea, in the present case, is not available to Lebanon for not filing the required permit, and even if it submits such a permit and a review against Israel, this court is not able to consider the dispute if it does not explicitly recognise Israel in front of the Court.

In our opinion, the solution to a complaint to the UN Security Council for Israel’s violation of UN Security Council Resolution 1707, while documenting this complaint before the United Nations General Assembly, is also in line with the request of an emergency meeting of the Council of Arab Foreign Ministers.