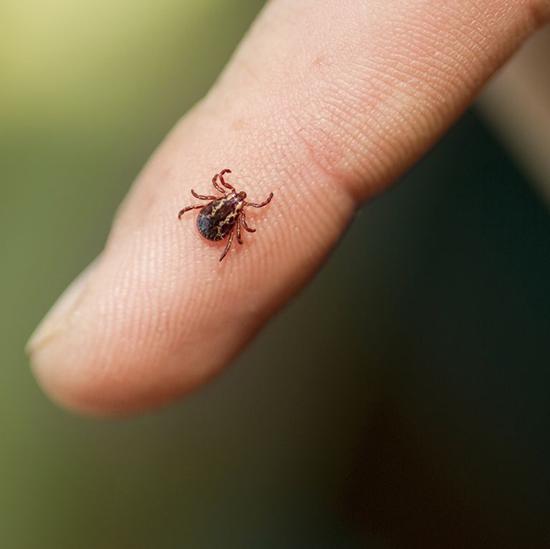 A tick is a small, blood-sucking mite that can spread Lyme disease. We explain how to remove it safely.

Concerned you might have a tick bite? If you think think you’ve been bitten by a tick, it’s important to safely remove it as soon as possible. While a tick on the body doesn’t usually cause any discomfort, the longer it remains attached to you, the greater the risk of it passing on Lyme disease and other infections. Here is everything you need to know about ticks including safe removal tips:

What is a tick?

A tick is a small, blood-sucking mite (not to be confused with tics, which are rapid, repetitive involuntary contractions of a group of muscles, causing bodily movements, or vocal sounds).

Normally ticks live on blood from larger animals, like deer or small mammals, but they may also attach themselves to humans. The tick sits on tall grass and trees, waiting for a possible ‘host’ (such as a human) to walk by. If a tick attaches itself to someone, it will typically find its way to a warm, moist and dark place on the body (like the crotch or the armpit). Often the person carrying the tick is completely unaware it is attached to them.

The tick will then insert a probe into the skin and begin sucking blood. In most cases the tick will leave after a while (simply by disconnecting and falling off the skin), or the host will get rid of it without any harm having been done.

If your tick bite is infected the skin will be red and the edges may feel slightly raised.

What is a tick bite infection?

Occasionally, the tick carries micro-organisms, including bacteria, viruses and protozoa which can lead to an infection. For example, in the UK ticks may carry a small bacteriumcalled Borrelia burgdorferi in their stomach, which is passed into a human during the blood-sucking process. This can cause an infection known as Lyme disease.

The longer the tick remains attached to the person’s skin, the greater the risk of catching a tick-borne disease, especially if it is there for more than 36 hours.

The longer the tick remains attached to the person’s skin, the greater the risk of catching a tick-borne disease.

There are many other tick-borne diseases around the world, for example Rocky Mountain Fever (caused by an infection with an organism called Rickettsia rickettsia) in East and South West USA, and Crimean-Congo Haemorrhagic Fever (caused by a virus) in Southern Asia, Northern Africa and Southern Europe.

If you think you might have an infection, make an emergency appointment with your GP to get it checked out.

Why is it important to remove a tick?

A tick on the body doesn’t usually cause any pain, but it is still important to get rid of it because of the risk of Lyme disease or other infections.

Lyme disease is the most common tick-borne infectious disease in Europe and North America. Up to 3,000 cases are estimated to occur every year in England and Wales, according to The Health Protection Agency.

Up to 15 per cent of these occur in people travelling abroad. But the rest typically occur when people visit countryside areas – such as Exmoor, the New Forest, the Yorkshire Moors or the Highlands of Scotland where tick-carrying animals such as deer are found.

What is Lyme disease?

Lyme disease is a condition caused by infection with the bacteria Borrelia burgdorferi, which may be carried by hard-bodied ticks (Ixodes ricinus) commonly known as deer or sheep ticks.

The disease is typically picked up in temperate regions of the northern hemisphere, usually in forested woodland or heathland areas, where small mammals and birds form the reservoir for the Borrelia burgdorferi bacteria.

If Lyme disease is not spotted and treated with antibiotics, it may cause long term chronic problems including arthritis, muscle pain and nerve damage.

In the UK, nervous system disease (neuroborreliosis) is the most common complication, with symptoms such as paralysis of the facial nerve (affecting muscles of the face) , meningitis and inflammation of the nerves coming out of the spine (radiculopathy) within weeks or months of the initial infection. Arthritis is less common in the UK but more often seen when the infection is picked up in the USA or Central Europe.

These late symptoms may be very generalised, and a diagnosis of Lyme disease may not be the first thing that comes to mind especially as the walk in the countryside where it all began may have been months or even year before.

How to safely remove a tick

The tick presses its head into the skin, so it’s important to try and remove all of it, as remnants in the skin could cause infection.

✔️ Seize the tick with a pair of tweezers as close to the head as possible. Take care not to pull it apart. Pull slowly and consistently until it lets go. Don’t pull too hard.

✔️ If the above method fails, tie a cotton thread around the tick as close to the head as possible and pull slowly until it lets go.

✔️ Do not attempt to remove the tick through burning or chemicals – this may cause more harm than good.

What to do if the tick’s head gets stuck

If the tick is accidentally pulled apart and the head stays in the skin, there’s a risk of being infected with other microscopic organisms.

This kind of infection has nothing to do with Lyme disease, but can still be dangerous and unpleasant. See a doctor if part of the tick is left in the skin or if infection occurs.

Do I need antibiotics if I have a tick bite?

If you have been bitten by a tick and have removed it, the risk of getting Lyme disease is so small that there is no reason to use an antibiotic. It is, however, important to watch out for symptoms that may indicate Lyme disease, especially a red spot close to the tick bite.

The spot gradually gets bigger and, eventually, a pale area will appear in the middle. This is often accompanied by headache and fever, which will usually appear between 3 and 30 days after the bite. If this happens, see a doctor immediately.

Once the diagnosis is confirmed, most people need a 2 to 4 week course of antibiotics to treat Lyme disease. If the disease is severe or in it’s later stages, intravenous antibiotics may need to be given.

How can I avoid tick bites?

It’s important when out walking in the countryside, especially in wooded or heath areas known to be a risk for Lyme disease, to take precautions to avoid ticks. This might include using insect repellents and covering up the skin with trousers tucked into walking boots or wearing long sleeves.

It’s also important after a walk to check yourself and the rest of the family (including the dog!) for ticks, because people often don’t immediately notice when one has attached itself to their skin.