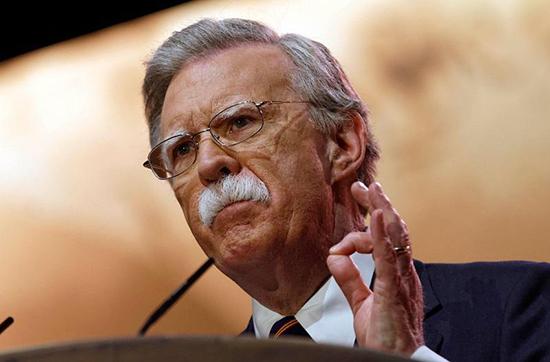 President Donald Trump’s national security adviser John Bolton has warned nations seen as obstacles to U.S. plans for Latin America that they must leave Venezuela and stop defending the socialist government opposed by the Trump administration.

Venezuela’s economic crisis boiled over into a geopolitical flashpoint in January that has polarized world powers, as the U.S. and its allies proclaimed their support for opposition leader Juan Guaidó’s political challenge to President Nicolás Maduro. Responding to Tuesday’s Newsweek article discussing the recent arrival of Russian, Chinese and Iranian planes intended to support Maduro and his government, Bolton told radio host Hugh Hewitt that “President Trump is determined not to see Venezuela fall under the sway of foreign powers.”

“If the Monroe Doctrine fails, if China and Russia, along with Cuba, establish domination over Venezuela, I think American strategic interests will be harmed,” Bolton said. “And as I said at the beginning, the people of Venezuela will be trapped in this dictatorship. We are seeing here the palpable proof of eight years of Obama administration policy mistakes.”

Obama’s decisions to reverse decades-long trends in isolating the Shiite Islamic Republic of Iran and the communist-led island of Cuba were widely welcomed by the international community, but the Trump administration has portrayed them as pandering to traditional foes accused of human rights abuses. The current White House has rolled back both Obama-era efforts and has hardened the U.S. position internationally.

With the notable exception of North Korean supreme leader Kim Jong Un, with which Trump forged a historic bilateral peace effort, the administration has doubled down on efforts to oust unfavorable governments around the world through the use of sanctions and threats of military action. Most recently, Trump warned that “all options are open” in not only deposing Maduro, but in expelling his international allies from the Western Hemisphere as well.

“Look, our objective is a peaceful transition of power to Juan Guaidó and the opposition,” Bolton said during Wednesday’s program. “But let’s not forget we’ve got between 40,000 to 50,000 American citizens in Venezuela.”

“We’ve got countries, as you mentioned, Colombia and Brazil on the border with millions of Venezuelan refugees who have come across. We’ve got terrorist organizations like the ELN [National Liberation Army] and FARC [Revolutionary Armed Forces of Colombia] who threaten Colombia,” he added. “We’re going to protect American national interest, and Maduro and his cronies ought to know that President Trump is very serious when he says all options are on the table.”

Moscow deployed up to 100 military personnel to Venezuela last month for a “military-technical cooperation” mission reportedly regarding the Russia-built S-300 surface-to-air missile defense system. China joined Russia in also sending humanitarian assistance to Venezuela, but denied media reports suggesting Beijing sent up to 120 troops as well. Iranian officials arrived Tuesday to restart flights to Caracas via the privately owned Mahan Air, which the U.S. sanctioned for allegedly serving the elite Revolutionary Guard, declared a terrorist organization by the Trump administration this week.

These countries have defended their ongoing dealings with Maduro as part of legitimate bilateral relations not concerning the U.S., which possesses a number of bases across Latin America, including in Colombia, as part of a global military network likely unrivaled by all other nations combined.

The United Nations also continued to recognize Maduro as Venezuela’s head of state, something Vice President Mike Pence protested Wednesday at a U.N. Security Council meeting. Following his appeal, Pence directly addressed Caracas’ envoy Samuel Moncada—who spent much of Pence’s speech toying with his phone—saying, “With all due respect, Mr. Ambassador, you shouldn’t be here, you should return to Venezuela and tell Nicolás Maduro that his time is up, it’s time for him to go.”