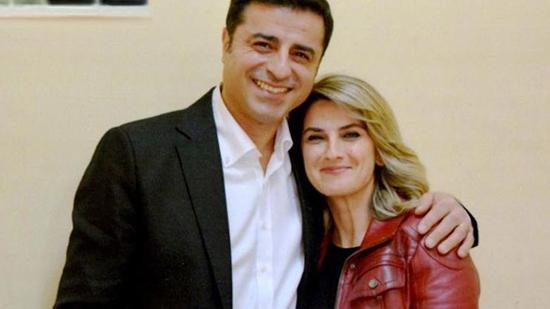 “Best wishes to Selahattin Demirtas of Turkey on his birthday,” the commission tweeted as the Kurdish leader turns 46.

The Commission’s website lists Demirtas, the former Co-chair of the Peoples’ Democratic Party (HDP), as a prisoner of conscience.

“Mr. Demirtas is a Kurdish politician who Co-Chaired Turkey’s third largest political party before being arrested and sentenced on politically-motivated terrorism charges.”

The mission of the Human Rights Commission is to promote, defend, and advocate internationally recognized human rights norms as enshrined in the Universal Declaration of Human Rights.

“The US House of Representatives Human Rights Commission makes it clear to the AKP government: elected officials like @hdpdemirtas belong in Parliament, not in prison,” the official Twitter account of the HDP in the US tweeted in response.

Demirtas was detained and promptly put in prison in November 2016 along with nine other lawmakers in a crackdown that purged President Recep Tayyip Erdogan’s political rivals shortly after a failed military coup attempt.

Turkish judicial authorities upheld a prison sentence of four years and eight months in December 2018 for the Kurdish political leader over “terrorist propaganda” in the wake of the European Court of Human Rights (ECHR) ruling to release him immediately.

“According to Turkey’s obligations under the European Convention on Human Rights, that ruling was binding,” the website of the Human Rights Commission stated.

Demirtas ran as the HDP’s candidate in Turkey’s 2018 presidential election from his prison cell. He came in third place with 8.40 percent of the vote—over four million votes in total.

A translated Kurdish version of the novel “Seher,” which Demirtas wrote, was the most sold book during the 14th Erbil International Book Fair, according to local media in the Kurdistan Region.