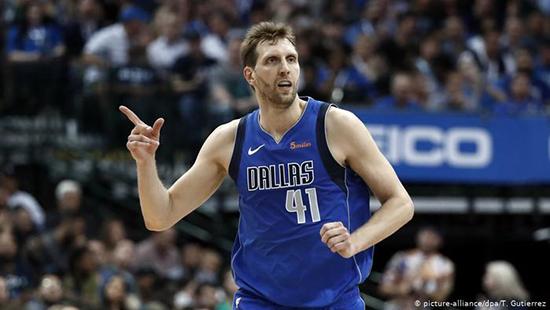 German NBA star Dirk Nowitzki has ended his unique basketball career. After his final Dallas Mavericks game, Nowitzki spoke to DW about his emotions, his children and why San Antonio was a special place for his farewell.

DW: Dirk Nowitzki, your NBA career has now come to an end after 20 years, two months and five days. How does that make you feel?

Dirk Nowitzki: I’m fine now, but there certainly were a few emotional moments. The video before the game was incredible [Nowitzki was moved to tears when San Antonio showed a clip of his career highlights on the big screen — the ed] and after the match as well, when it dawned on me that everything was finally over. I tried to keep my feelings in check as far as possible, but it proved quite difficult.

You left the court to a standing ovation. Was that the way you wanted your career to end?

It was as good as it could have been without the playoffs. Of course, I would have loved to have had my final game at home. Tuesday would have been the perfect time [In the final home game of the season against Phoenix, Nowitzki announced his retirement — the ed]. But the scenes here were incredible. Even though we were playing away, it felt and sounded like a home game. The “MVP” chants were so loud when I stepped up to take free throws. So I’m delighted it was such an unbelievable experience.

Thrown away socks and pants

It feels like you have come full circle in San Antonio. It was here in 1998 that you first rose to prominence in the United States, scoring a game-high 33 points in a shock 104-99 victory for a Rest of the World team against the US. And now, you ended your career in the same place.

Yes, my career really got going in San Antonio. Before that game, I was a relative unknown at DJK Würzburg. But suddenly, I was catapulted onto the global stage. Everything happened incredibly quickly. I was drafted straight from the German second division into the NBA. So it is quite fitting to come full circle here. I’ve enjoyed some fantastic experiences, matches and playoff series against the Spurs.

How did you feel sitting alongside your teammates in the locker room for one last time?

It was rather strange. Before the game, it was really emotional pulling on my jersey for the last time. And then taking it off again afterwards. I threw everything away: my socks, pants, everything. We don’t need to wash them anymore, we can just throw them away. So that was quite strange. I’m sure I will miss it all for a few months, years or maybe even for ever — who knows? But I can say that I gave it everything l had.

Your children are two, four and five years old. Did they realize these last few days were special for their dad?

I didn’t see them after the game in Dallas [the Mavericks flew straight to San Antonio — the ed], but they were courtside right until the end. They are probably a bit too young to comprehend that I have stopped playing. But luckily, there’s always YouTube. When they are a bit older, I’ll force them to watch all the highlights until they are sick of the sight of them! That way I can show them that their dad used to be better than he was at the end when they saw him play.

Dirk Nowitzki is Germany’s most famous basketball player and was one of the greatest ever over 21 seasons with the Dallas Mavericks. He greatest  successes were winning the 2011 NBA title with the Mavs, several MVP crowns, as well as bronze for Germany at the FIBA World Championship and silver at the European Championship. In April 2019, the 40-year-old Nowitzki announced his retirement from basketball.