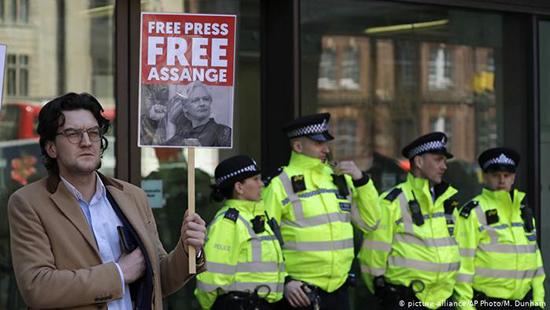 WikiLeaks founder Julian Assange has been arrested in London. We should fight for him if we truly believe in the freedom of the press, writes DW’s Matthias von Hein.

This makes a mockery of the rule of law, and constitutes a downright attack on freedom of opinion and the freedom to publish uncomfortable truths, as journalists often do. Nobody can seriously believe the United Kingdom spent all these years and millions of pounds posting police guards in front of the embassy just because of a 2010 arrest warrant against Assange. This needs to be stressed unequivocally: The only valid accusation against Assange is that he jumped bail in 2012. Britain usually deals with this by handing out a fine, or at most a prison sentence of up to one year. Assange has already spent the past seven years inside a tiny room in the Ecuadorian Embassy — this itself was disproportionate.

The real reason for Assange’s arrest seems to be that Britain is doing its American ally a favor. The United States has already requested his extradition and London will oblige. After endless rumors, it became clear in autumn 2018 that a US court was preparing a criminal case against Assange for divulging state secrets. Indeed, then-Attorney General Jeff Sessions called Assange’s arrest a “priority” in 2017. And in that same year, freshly inaugurated CIA director Mike Pompeo labeled WikiLeaks a “hostile non-state intelligence service” and threatened to shut it down.

At the time, Pompeo could hope to deliver on his promise because Ecuador’s left-wing government led by Rafael Correa, which had until then protected Assange from the US, had lost power. Correa’s successor, Lenin Moreno, took a different approach to the high-profile refugee in Ecuador’s London embassy, gradually making Assange’s stay there unbearable. One year ago, Assange was barred from using the embassy’s internet and telephone connections. He was also forbidden from receiving guests, save for his lawyers. Today we also know these visits were illegally monitored.

It became clear in March that the US was ramping up its efforts to get Assange behind bars when it once again jailed Chelsea Manning, the source of the famous Iraq War Logs and Afghan War Diary leaks. Manning, who had already spent nearly seven years behind bars until being pardoned by then-President Barack Obama, has refused to testify against WikiLeaks.

Granted, WikiLeaks reveals uncomfortable truths. These are particularly awkward for major players that want to stay off the radar while conducting their business — for instance the US military, the US intelligence services, US diplomats and so forth. But genuine democracies need their citizens to be informed and to be aware of what their governments are doing in secret.

Julian Assange himself never divulged any secrets — he merely published them, just like reputable media outlets. In fact, many German media outlets directly benefited from Assange’s revelations. So now is the time to return the favor and speak up for the man who gave us all access to WikiLeaks material. For if we don’t, major players might start going after media outlets next.