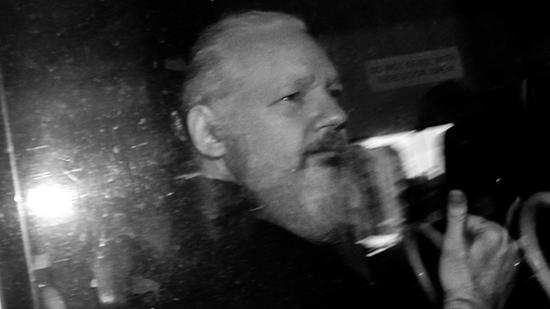 US lawmakers from both parties cheered the arrest of WikiLeaks founder Julian Assange, while President Donald Trump claimed he ‘knows nothing’ about the outlet, despite often saying ‘I love WikiLeaks’ during the 2016 campaign.

Assange was dragged out of the Ecuadorian Embassy in London on Thursday morning by UK police, acting on a US warrant for his arrest on charges of “conspiracy to commit computer intrusion.”

Senator Joe Manchin (D-West Virginia) was on CNN’s New Day show when the news broke, and he rejoiced that Assange is now “our property and we can get the facts and truth from him.”

“It will be really good to get him back on United States soil,” says @Sen_JoeManchin on Julian Assange’s arrest.

“He is our property and we can get the facts and the truth from him.” https://t.co/fLnA1AKrpJpic.twitter.com/0pKuILT6NP

Though current US charges against Assange are related to the 2010 publication of secret US documents, Democrats and anti-Trump Republicans in Congress were quick to drag up the “Russiagate” conspiracy theory to argue that the WikiLeaks publisher is really an agent of the Kremlin.

“I hope he will soon be held to account for his meddling in our elections on behalf of Putin and the Russian government,”tweeted Senate Minority Leader Chuck Schumer (D-New York).

Now that Julian Assange has been arrested, I hope he will soon be held to account for his meddling in our elections on behalf of Putin and the Russian government.

Whatever Assange’s intentions were when he started WikiLeaks, “what he’s really become is a direct participant in Russian efforts to undermine the West and a dedicated accomplice in efforts to undermine American security,” said Sen. Mark Warner (D-Virginia), ranking member of the Senate Intelligence Committee and one of the leading champions of ‘Russiagate.’

Whatever Julian Assange’s intentions were for WikiLeaks, what he’s become is a direct participant in Russian efforts to weaken the West and undermine American security. I hope British courts will quickly transfer him to U.S. custody so he can finally get the justice he deserves.

Intelligence Committee chair Richard Burr (R-North Carolina) agreed with Warner, as usual, saying Assange and WikiLeaks have “effectively acted as an arm of the Russian intelligence services for years.”

Sen. Ben Sasse (R-Nebraska) called Assange “a wicked tool of Vladimir Putin and the Russian intelligence services” who “deserves to spend the rest of his life in prison.”

Engel’s committee also went after RT America reporter Dan Cohen, saying the First Amendment protected even “Russian propaganda outlets like the one you work for,” but not “criminals who weaponize stolen information.”

The first amendment protects free expression, even for Russian propaganda outlets like the one you work for. It doesn’t protect criminals who weaponize stolen information. https://t.co/nZBq8ydidC

In 2016, WikiLeaks published Democratic National Committee documents showing that party officials were colluding to swing the primary election for Hillary Clinton – which was later confirmed in a memoir by DNC chair Donna Brazile. WikiLeaks also published emails from Clinton campaign chair John Podesta’s private account, in the month leading up to the election.

One of the rare exceptions was Rep. Tulsi Gabbard (D-Hawaii), who told CNN that documents published by WikiLeaks “informed the American people about actions that were taking place that they should be aware of” and “provided transparency” about civil liberties issues as well as “actions that our military was taking in the Middle East that they should not have been.”

The arrest of #JulianAssange is meant to send a message to all Americans and journalists: be quiet, behave, toe the line. Or you will pay the price.

Former Senator Mike Gravel (D-Alaska), who is vying for the Democratic presidential nomination, openly called for Assange to be pardoned.

Official statement from Sen. Mike Gravel about the arrest of Julian Assange pic.twitter.com/LJix1KXBhI

Assange got no sympathy from the Trump administration, however, even though candidate Trump repeatedly told campaign rallies “I love WikiLeaks!” during the run-up to the 2016 election. Asked about Assange’s arrest on Thursday, Trump told reporters:

I know nothing about Wikileaks. It’s not my thing… I don’t really have an opinion.

In September 2017, Trump’s CIA Director Mike Pompeo, who also cheered WikiLeaks releases in 2016, called WikiLeaksan “enemy” of the US and described it as “akin to a hostile foreign intelligence service.”

Underground ancient city to be unearthed