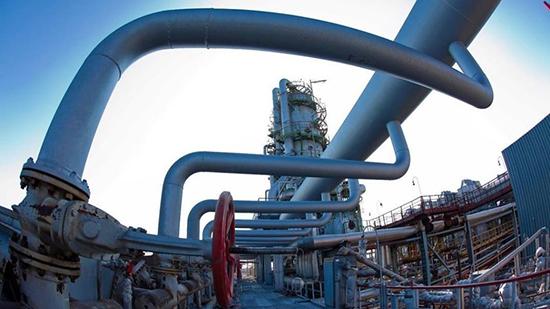 MOSCOW (Reuters) – European refiners are paying the price for U.S. oil sanctions on Venezuela and Iran as they scramble to replace the sour crude Washington has blocked from the global market with increasingly expensive Russian oil, trading sources said and data showed.

Compounding the impact of sanctions, OPEC members have mainly cut sour crude output as part of their deal with allied producers to boost oil prices while a large, new refinery, designed to run on sour oil, has just started up in Turkey.

U.S. output is soaring and exports are set to jump later this year as new infrastructure comes online but it is not an alternative, being mainly light and sweet.

As a result, European refiners have been left competing to secure as much medium, sour Russian Urals as they can, pushing the differential of that oil to levels not seen since 2013.

“Urals is anchored in a positive zone versus dated Brent and there is no indication it will fall to a discount any time soon,” a trading source at a European oil major said.

In the Mediterranean, the differential for Urals typically trades at a discount of at least a dollar to benchmark dated Brent but since early November, the level has spiked and now stands at a premium of 70 cents a barrel.

Thanks to the higher premiums, Russia made an additional $140 million in March from seaborne and pipeline deliveries versus October prior to the sanctions coming into effect.

Initially, Europeans gravitated to heavy, sour Venezuelan oil when sanctions on Iran hit in early November but then Washington also placed sanctions on the Latin American country in late January in a bid to oust President Nicolas Maduro.

Even though sanctions on Venezuelan crude will not come into effect until the end of April, the oil is effectively already untouchable as the U.S. State Department has exerted direct pressure on foreign companies to stop all dealings.

The two sets of sanctions combined have taken at least 800,000 barrels per day (bpd) out of the market, which is as much as what the Organization of the Petroleum Exporting Countries agreed to cut.

The United States granted waivers on Iranian oil to six jurisdictions including three countries in the region – Italy, Greece and Turkey – but only Turkey was able to continue purchases. It remains unclear whether the current waivers will be extended in May.

The situation is set to worsen as European refiners emerge from their springtime maintenance just as Middle Eastern Gulf sour crude producers increasingly favor Asia, where refining capacity in the near term is set to jump.

Saudi Arabia, a major sour crude producer, is shouldering the bulk of the OPEC and non-OPEC cuts. Between October 2018 and March this year, the kingdom slashed its exports to Europe by nearly half, Refinitiv Eikon data shows.

Iraq reduced its contracted volumes for European refiners in 2019 and increasingly sells its oil to the highest bidder via tender.

Meanwhile, Azerbaijan’s 200,000-bpd STAR refinery in Turkey is slowly ramping up and will be a new competitor for dwindling sour oil.

Designed to run on sour grades such as Russian Urals and Iraqi Basra and Kirkuk, the refinery took 184,000 bpd of Urals in March, Refinitiv Eikon data showed.

“One expected STAR’s launch to be a serious jolt for the market, but little did we know it would make the sour shortage this bad … refiners are rushing for sours,” a European trader said.

As the supply-side structure has changed, the spread between sour and the historically far more expensive light, sweet crude has thinned and even flipped in some instances.

In the Mediterranean, the light grade Kazakh CPC Blend trades at a discount to Urals and Kurdish crude, which used to be one of the region’s cheapest oils.

The Urals price out of the Black Sea has also increasingly traded at a premium to Urals out of Baltic ports – previously a rare occurrence. The trend has prompted commodity price-reporting agency S&P Global Platts to start an industry consultation on changing how the Urals market is assessed.

“All refiners are looking for Urals or a Urals replacement,” said a third trader in an international trading firm.

“And we see that it won’t be enough for everyone.”