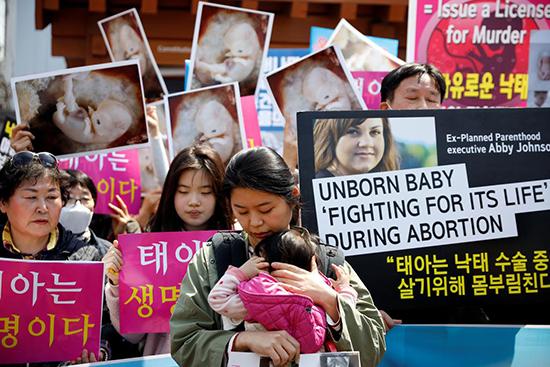 SEOUL (Reuters) – South Korea’s Constitutional Court on Thursday overturned a ban on abortion that has stood for more than 65 years, saying in a landmark ruling that current law unconstitutionally curbs women’s rights.

In a statement, it said the ban, as well as a law making doctors liable to criminal charges for abortions done with the woman’s consent, were both unconstitutional.

“The law criminalizing a woman who undergoes abortion of her own will goes beyond the minimum needed to achieve the legislative purpose and limits the right of self-determination of the woman,” it said in its ruling.

Seven of the nine justices ruled the law unconstitutional, and two dissented. It had survived a challenge in 2012 when the court split evenly, four to four, as one seat was vacant then.

“I believe this ruling frees women from shackles,” said Kim Su-jung, a lawyer representing the plaintiff, a doctor charged with conducting 69 illegal abortions.

The ruling reflects a trend towards decriminalizing abortion, as cases of criminal punishment have fallen in recent years.

Just eight new cases of illegal abortion were prosecuted in 2017, down from 24 in 2016, judicial data show. Of 14 cases decided in lower courts in 2017, 10 postponed a ruling on condition that no crime be committed for a fixed time.

A survey by polling firm Realmeter last week showed more than 58 percent of South Korean respondents favor scrapping the ban, but a little over 30 percent wanted it retained.

Dueling demonstrations outside the courthouse highlighted persistent divisions in opinion.

“How could you kill a baby that’s growing inside you? Abortion is a murder,” said Kim Yeong-ju, a 47-year-old mother of two who demonstrated in favor of the ban.

But the ruling helps ensure pregnancy is a personal choice, said Lee Ga-hyun, who joined a protest against the law after she saw a friend risk her life using illegal medication for an abortion.

“I welcome today’s ruling, which made it possible for women like me and my friend to live their lives freely,” added Lee, 27.

The abortion ban dates from 1953, and has not changed materially since South Korea first adopted its criminal law after the 1950-1953 Korean War.

A 2017 petition urging the presidential Blue House to scrap the law against abortion and allow abortion medication drew more than 230,000 signatures.

At the time, a senior government official said existing law was problematic because it only held women accountable for abortion.

President Moon Jae-in, a liberal, has not stated clearly if he supports the law, but has called for more discussions to build consensus.

The law prescribes jail for up to a year or fines of up to 2 million won ($1,756) for women who undergo abortion.

It also sets terms of up to two years in jail and seven-year license suspensions for medical professionals, including doctors, who provide abortions at the woman’s request.

Exemptions now allow abortions within 24 weeks of pregnancy for medical reasons, such as a hereditary disease or grave danger to the mother, or following rape.

In all those cases, the law requires the spouse’s permission.

“If the case does not fall under an exemption, the law forces the pregnant woman to maintain the pregnancy completely and uniformly, without exception,” the court said.

But the law will stay on the books until the end of 2020, it added, to allow time for its revision.

In a statement, the government said it would respect the decision and take steps to comply.