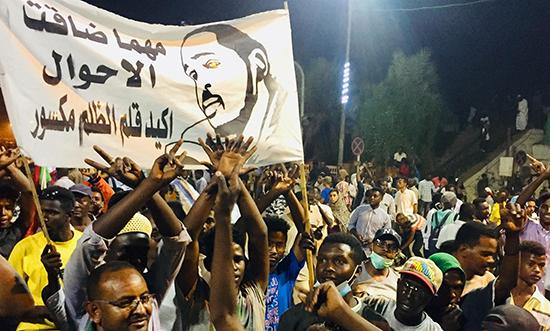 President Omar al-Bashir, who ruled Sudan for 30 years, was on April 11 overthrown and arrested in a coup by the armed forces.

In an address on state television, Defense Minister Awad Mohamed Ahmed Ibn Auf, announced a two-year period of military rule to be followed by presidential elections.

He said Bashir, 75, was being held in a “safe place” and a military council would now run the country. He did not say who would head it.

Seated on a gold-upholstered armchair, Auf announced a state of emergency, a nationwide ceasefire and the suspension of the constitution. Sudan‘s airspace would be closed for 24 hours and border crossings shut until further notice.

The main organizer of protests against Bashir, the Sudanese Professionals Association, rejected the minister’s plans. It called on protesters to maintain a sit-in outside the defense ministry that started on Saturday, a source with the group said.

Bashir has been indicted by the International Criminal Court in The Hague and is facing an arrest warrant over allegations of genocide in Sudan‘s Darfur region during an insurgency that began in 2003 and led to death of an estimated 300,000 people.

Despite the arrest warrant Bashir defied the court by visiting several ICC member states. Diplomatic rows broke out when he went to South Africa in 2015 and Jordan in 2017 and both failed to arrest him.

The downfall of Bashir follows the toppling this month of Algerian strongman Abdelaziz Bouteflika, also following mass protests after three decades in power.

Thousands of people flocked to an anti-government protest outside the defense ministry on Thursday, while huge crowds took to the streets in central Khartoum, dancing and shouting anti-Bashir slogans. Protesters chanted: “It has fallen, we won.”

Demonstrators called for a civilian government and said they would not accept an administration led by military and security figures, or by Bashir’s aides.