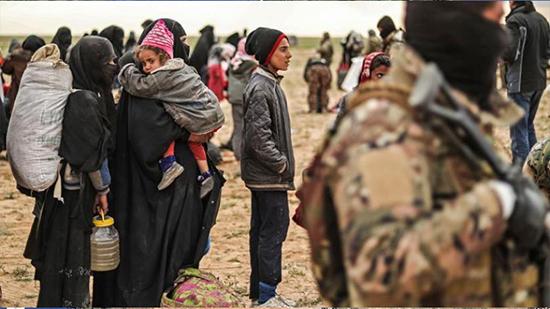 ERBIL (Kurdistan 24) – The local administration in northeast Syria has rejected reports they will hand over Iraqi families accused of Islamic State membership to Baghdad, but rather, only refugees that have requested to return to Iraq.

According to Kamal Akef, a spokesperson for the Foreign Relations Department of the Democratic Autonomous Administration of North and East Syria (DAA), the agreement is focused on refugees, and not Iraqi Islamic State detainees.

Akef rejected the “unreliable news” and said the DAA’s foreign relations department had met with an official delegation from the Iraqi government to discuss the voluntary transfer of Iraqi refugees who are in camps in northeastern Syria.

Over the last few years, many Iraqis fled the Islamic State in Iraq, ending up at refugee camps in northeastern Syria.

According to United Nations statistics, Syria’s al-Hol camp, located in Hasakah governorate in the country’s northeast, had hosted over 20,000 Iraqi refugees in 2017.

Akef explained that the Iraqi refugees at al-Hol now “exceeds 30,000,” underlining that they “have no relations to the [ISIS] terrorist organization.”

He added that 4,000 people, including women and children, had registered their names to return to Iraq voluntarily.

Akef confirmed that the Iraqi delegation had received the list of names and said those who did not register to leave the camp would suffer no pressure to do so and be treated according to international human rights conventions.

The al-Hol camp witnessed an increase in numbers of residents during an offensive by Syrian Kurdish-led forces, backed by the US-led coalition, to defeat the so-called Islamic State in its last bastion of Baghouz that ended on March 23.

For months, the camp has been far over its capacity for residents and currently houses over 70,000 people, many of them women and children.

On Thursday, UN Senior Humanitarian Advisor for Syria Najat Rochdi highlighted that point in a statement, describing the humanitarian crisis unfolding at al-Hol as a great concern.

She noted that the camp’s population exceeds 73,000 in an area originally intended for 41,000 people.

Rochdi said people are extremely vulnerable and most who arrive are malnourished and suffer from a wide range of health problems.

Referral hospitals are overwhelmed and cannot accept any more patients, she stated, adding other pressing needs include shelter, water, sanitation, and hygiene.

Earlier this month, France pledged an additional one million euros to provide humanitarian aid to the displaced people in northeastern Syria.