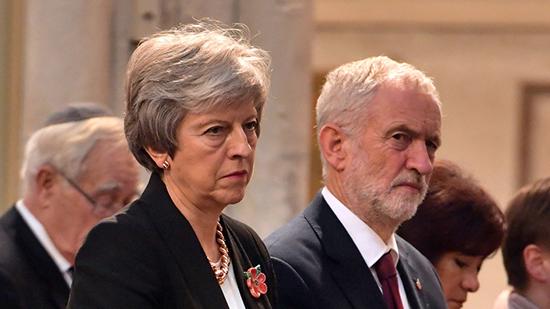 Labour Party leader Jeremy Corbyn would become prime minister and his party would take over the House of Commons, dealing a crushing blow to the May government should a snap election be held now.

An Electoral Calculus poll commissioned by the Sunday Telegraph has revealed that the Conservatives would be upstaged by Corbyn and Co. in the event of a general election. The incumbent PM Theresa May’s party is set to lose 59 seats in the legislature, which would leave it with 259 seats. The Labour Party is, on the other hand, projected to overtake the Tories by claiming 296 seats.

While that would not give Corbyn the majority needed to form a one-party government, it would be enough for him to rule in a coalition with the Scottish National Party (SNP).

President of the British Polling Council Professor Sir John Curtice, cited in the report, said that the Tories’ bleak election prospects are linked to the growing frustration over May’s repeated failure to deliver Brexit.

In the meantime, some the Tories’ voters, sick and tired of the divorce saga, are also being “drawn back to either UKIP or Nigel Farage’s newly launched Brexit Party,” Curtice said.

Electoral Calculus founder Martin Baxter said that May might now realize that the underlying cause behind David Cameron’s decision to carry out a referendum on leaving the EU in the first place was his desire to stem the rise of pro-Brexit parties.

“It wasn’t to placate his own Euroskeptic MPs, instead it was to stop Conservative voters defecting to pro-Brexit parties,” he argued.

The results of the poll draw on a survey of 8,561 people conducted between April 2 and April 11.

Apart from mounting pressure from the opposition, May is facing heat from within her own party, where some are calling for a change in the rules that would allow her to be voted out of the party leadership before the end of the year. The current guidelines established by the party’s 1922 Committee allow a confidence vote to be held only once a year. May survived one in December, winning it by 200 votes to 117. She should not face another until December 2019. However, two former chairmen of the committee have argued that the rules could be changed. “Conservative MPs are responsible for their party. If they wish to change these rules there is nothing standing in their way,” Lord Spicer and Lord Hamilton wrote in the Sunday Telegraph on Saturday.

Earlier this week, EU leaders agreed to extend the Brexit deadline to October 31, after the UK was faced with an imminent possibility of crashing out of the EU without a deal after all three attempts to push it through the House of Commons failed.