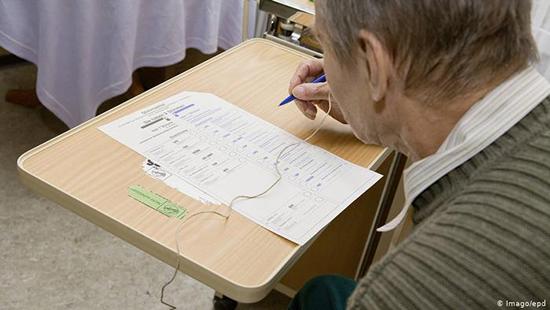 Germany’s top court is deciding on an urgent motion to grant voting rights to tens of thousands of disabled people ahead of next month’s European elections. Opposition parties say time is running out.

The Federal Constitutional Court will Monday hear an urgent motion filed by Germany’s opposition parties to let disabled people under full-time care cast ballots in the European elections on May 26.

More than 80,000 individuals with disabilities are barred from voting under current legislation, which the top court has already found to be unconstitutional. But planned government reforms to correct the situation will only be enacted after the EU vote.

Verena Bentele, the president of the social welfare association VdK Germany, told public broadcaster Bayern 2 she hoped the court’s decision would be swift: “What irks me so much about this issue is that we have been calling for this for years.”

She added that the government had for a long time “done nothing,” and only acted after a decision by the Constitutional Court earlier this year.

Jürgen Dusel, the government’s disability commissioner, told broadcaster SWR 2 that it wasn’t just about implementing “something nice, but about fundamental rights.”

Call for change: Disability activists have long been demanding an update to Germany’s electoral laws, which exclude the more than 80,000 disabled people under court-ordered supervision. In January, the Constitutional Court in Karlsruhe ruled that these laws were discriminatory and unconstitutional.

Planned reforms: The ruling coalition of Chancellor Angela Merkel’s conservative CDU/CSU bloc and the Social Democrats in March moved to pass amendments to the law, but those changes will only come into force on July 1. The coalition pledged in 2018 to enshrine the inclusion of people with disabilities in the electoral process but had since struggled to finalize an agreement.

Swift reforms needed: The urgent motion before the Karlsruhe court on Monday was filed by the Greens, the pro-business Free Democrats and the Left Party. They argue not allowing disabled people to participate in the EU elections is a violation of their constitutional rights.